Every time I pass by The Abbey I remember what it had been like on that day I visited it for the house-contents auction in 2009. The rooms with pale, dusty light coming in through the stained-glass windows, the paint peeling from the walls and the crooked, creaking passageways that formed the maze of rooms. People had rambled unescorted through the rooms, some of them looking at the objects up for auction, but most, like me, just curious to see inside.

Ten years on, I’m at The Abbey again, visiting the refurbished house and gardens as part of a focus tour for Sydney Open. Being November, the jacaranda trees are flowering, two purple clouds above bright pink bougainvillea. This frames the house, with its tower and gothic-arch windows and gargoyles.

The house feels different – lighter, more orderly – but the details of it are much the same. The entrance, with its blue ceiling painted with golden stars, opens out into the central hallway, which has a tiled floor and stencilled patterns of dragons and flowers on the walls. I pause here, deciding which way to turn. As with my visit ten years before, the house is open to walk through without restriction, and there are many doorways to choose from.

I choose the tower, and climb up the wide staircase, past the goddesses in the stained glass windows, and the entrances to bedrooms and sitting rooms, following the narrowing staircase up to the room at the top. From here I can see the smoke haze over the city, the silver stretch of harbour water, the roads choked with Saturday morning traffic. From this vantage point there seems to be barely any movement below, although I know that on ground level, out there, it would feel very different. It is tranquil in the tower room, and I sit on the cushioned bench under the windows until I can hear another visitor’s footsteps ascending.

View from the tower.

The Abbey is a house of details, and every wall, floor and fixture has some kind of pattern or motif to distinguish it, or a painted figure to keep watch, whether it be a goddess chiselling a sculpture, bearded gents carousing, or owls or cockatoos. The house feels alive with these characters, as if they hold within them something of the spirits of the many people who have lived here over the last century. These figures have watched cycles of residents move through, have watched the house fall into disrepair, and have seen its restoration. 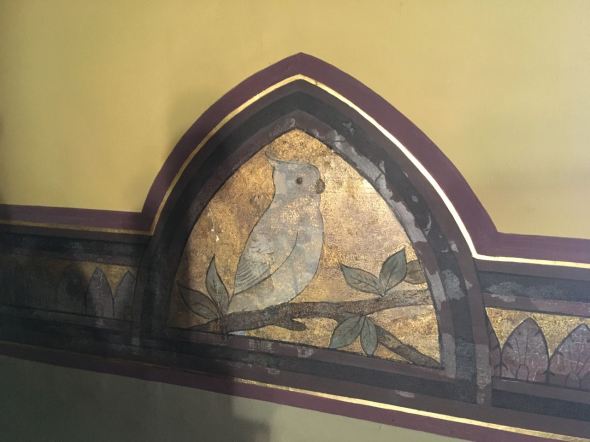 The sunroom where I remember spending a few minutes on the auction day – watching the rain coming in and noticing the tendrils of vine that had snaked in from the outside – is now clear and neat, and the sun shines through the stained-glass windows. It’s an office now, with a desk and shelves and the regular details of a contemporary room. I go to look out through the patterned panes at the houses on the streets below, their front gardens decorated with giant spiderwebs made of torn-up sheets (Halloween was a few nights earlier, and Annandale houses seem to favour giant spiders in giant webs as their decoration). 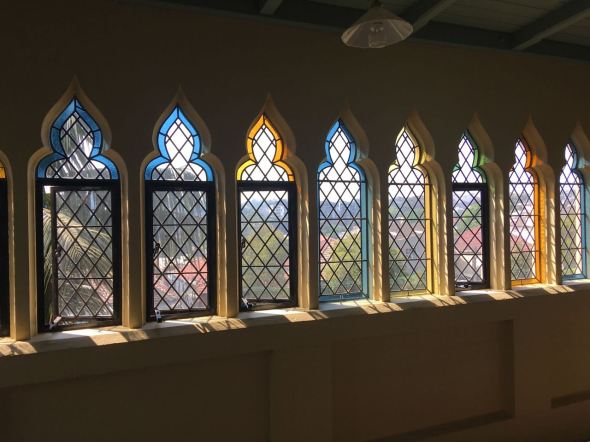 The house is made up of three sections: the main wing with the tower, a connecting annexe with a long colonnade that looks over the garden, which leads to another, smaller, wing of the house. On the ground floor of the annexe is the kitchen, outside which the house’s owners chat to visitors and their two old, friendly dogs lean in for a pat.

It’s a house that excites your imagination, one of the visitors says. Yes, says another, I’ve always wondered what it is like in here. All through the house people are saying much the same as this, for it is indeed one of those houses that sets you wondering, trying to imagine what it might be like to step inside. Sometimes, on rare occasions, you get the chance, to see how it is now, to imagine how it might have been, and to look out from the windows at the harbour and the city beyond.

Thank you to Sydney Open for another year of excellent tours and openings – there’s still tickets for tomorrow if you’re reading this before Sunday Nov. 3rd and haven’t bought one yet! I’m doing a talk in the Members Lounge at 1:30pm too.

This year during Sydney Open I’m going to go on a tour of The Abbey, on Johnston Street in  Annandale. I thought, as Part 1 to the story, I’d reflect on my first visit, in 2009, when the house and its contents were up for auction.

If you know Annandale, you will know the Witches Houses, the row of Victorian-era mansions on the high side of Johnston Street with tall narrow spires like enormous witch’s hats. The subject of many generations’ fantasies of mansion-living, they preside over the street and the small terrace houses that cluster along the low-lying streets below. In the 1880s the block had been bought by the architect John Young, and eight grand houses built. Most of them remain, although in the 1960s two were demolished and replaced with red-brick apartment blocks that are now conspicuous in their plainness.

At first my attention had been attracted by Kenilworth, the house at the eastern end of the row. It has the tallest spire, which extends down in a column from top to bottom like a Victorian-era rocket-ship. But over time, often passing by them, my favourite of all the houses became the one on the corner. Up until the late-2000s it was partially hidden by tall trees and vines, which grew over the sandstone wall around it. Known as the Abbey, it had the look of an archetypal haunted house, overgrown, spooky and mysterious.

The story was that, in 1881, John Young had built it for his wife, as an enticement for her to join him in Sydney. It is an unusual kind of lure, a sprawling, neo-gothic castle, made of rough-hewn blocks of sandstone and attended by gargoyles, with rows of long, narrow stained glass windows, which give it the look of a reconstituted church. She was not enticed, and the house went on to various uses and fortunes. In the early 20th century, being so large and being located in the then-working-class suburb of Annandale, it was divided up into apartments, before being returned to the one owner when it was bought by the Davis family in 1959.

I’d long-wondered what it was like inside. Many people knew: it had been notorious for the parties held there, and in the Davis-era the house saw many visitors and residents. The Abbey’s patriarch was Geoffrey Davis, a medical doctor and member of the the mid-twentieth-century group of left-wing and anti-authoritarian writers and intellectuals known as the Sydney Push. Reading into the house’s history, I was particularly interested to find out that the writer Christina Stead, author of Seven Poor Men of Sydney, The Man Who Loved Children, and For Love Alone, had lived here at the very end of her life in 1982.

Dr Davis died in 2008, and shortly afterwards the house, and all its contents, were put up for sale. One weekend the house was open for the viewing of the contents auction. My chance to visit had arrived. Many others were also taking the opportunity, as the rooms seethed with people. Inside, the rooms seemed joined together in a confusing maze, all different sizes and levels of formality. I examined the miscellaneous objects displayed within them as I moved through the warren of interconnecting chambers. Everything was a bit dusty and motheaten, leather upholstery cracked, paint and wallpaper peeling, the rooms smelling of cats. 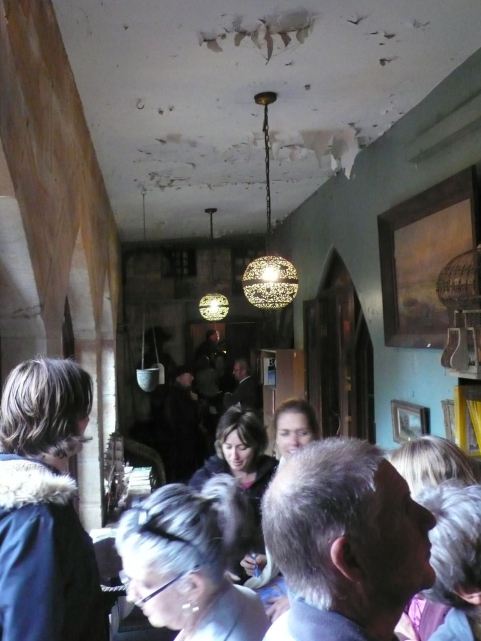 The objects on display were the strange, stranded junk of a lifetime and beyond: phonographs, collections of shells, magic lantern slides, landscape paintings, 78rpm records, cloisonne vases, a zither, bevel-edged mirrors, tiles painted with butterflies or scenes from Shakespeare. Everything that could be removed from the house had a tag dangling from it, from the chandeliers to a box containing rusty tins of shoe polish. I had a printed booklet in my hand but soon gave up trying to correlate the listings with the objects and just moved through the rooms, trying to imagine myself there decades before, at one of the notorious parties. 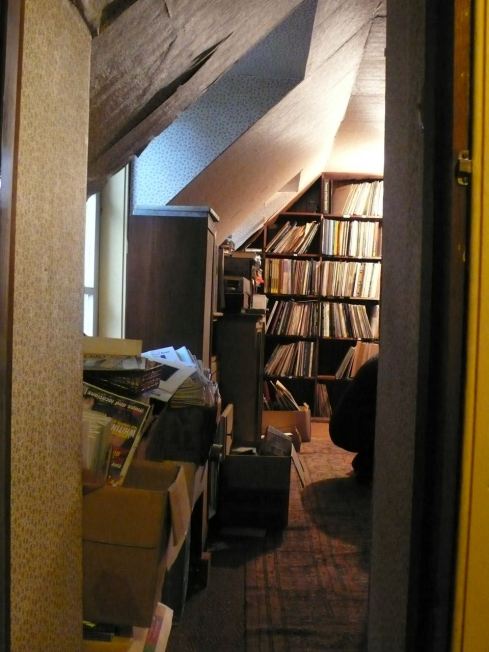 At the time of the auction of the house and of its contents, there were many articles in the media about The Abbey. Some of these included interviews with members of the Davis family who had grown up in the house. My favourite detail was from one of his children, who had admitted that it “had been difficult moving on to regular homes after a youth in the Abbey”.

I tried to imagine it as I stood in a long, narrow sunroom at the side of the house. One of the panels in the stained glass windows was missing, and rain was coming in, down onto the vases on the table below. This rainy sunroom was the only room I’d been in alone, and I felt as if I was playing a game of hide and seek as I stood there, looking at a collection of shells in a box. Inside it there was a crumpled, unfilled-in application for a dog license in between a conch and a nautilus shell, and I smoothed it out and replaced it, feeling like I, too, had ended up here at random, among all the miscellaneous objects that were soon to be moved off elsewhere.