In addition to the tv transmission towers of the Artarmon Triangle, there are many more Eiffel Towers to be found in Sydney.

Some details of Sydney’s history lurk close to the surface and are often repeated. Closely coupled with the AWA Tower is the fact that it used to be the tallest building in Sydney. The AWA is defined by what it once was, the decades between 1939 and 1962 when its radio mast topped the city skyline. In part it is because it seems so unlikely as a city’s tallest building now that the city has grown up around and above it.

The AWA mast is Sydney’s best known Eiffel Tower; the design was based on the Paris original. The mast allowed the AWA to exceed the 150 foot limit for city buildings that applied until the late 1950s, as it was not considered part of the overall height. The building’s caretaker would take groups of people up to the viewing platform on the mast to look out over the city. This was until the day in the 1970s when a sightseeing group were stuck in the lift between floors for four hours before anyone noticed they were missing.

Eiffel Towers have spread throughout the Sydney suburbs. They are transmission towers and church spires, they are found in paintings on the walls of cafes, on signs for bakeries and shoe shops. On Canterbury Road, across from the run-down and shuttered-up old shopping strip, an Eiffel rises from the roof of a digital camera store. The building once housed a radio manufacturer which was a subsidiary of AWA, making the Canterbury tower is a smaller, suburban relative to the city Eiffel. 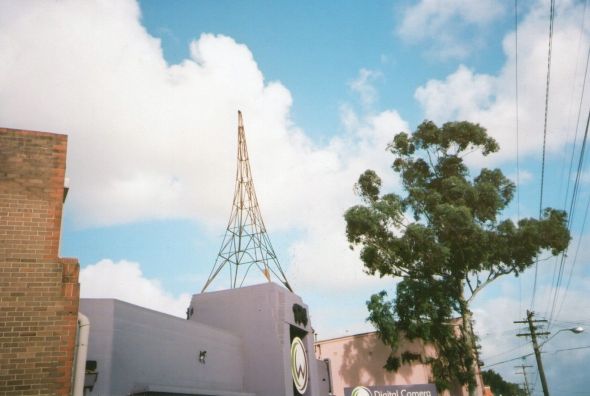 At Lidcombe another Eiffel rises from the public weighbridge and perspex dealer on Parramatta Road. The perspex place is a weird combination of breezeblock walls, shipping containers and faded signs with six digit phone numbers. The Eiffel only adds to its mystery.

Then there are the Eiffels that exist for one night only, in suburban gardens.

Do you know any suburban Eiffels? Look out for them – there are more out there than you’d think.

Paris is a long way from Sydney, but there are plenty of Eiffel Towers in the Sydney suburbs. On the lower north shore there are three – the television transmission towers collectively known as the Artarmon Triangle. These tall, red and white pyramids at Gore Hill, Artarmon and Willoughby have been sending out tv signals since their construction in the 1950s and 60s. 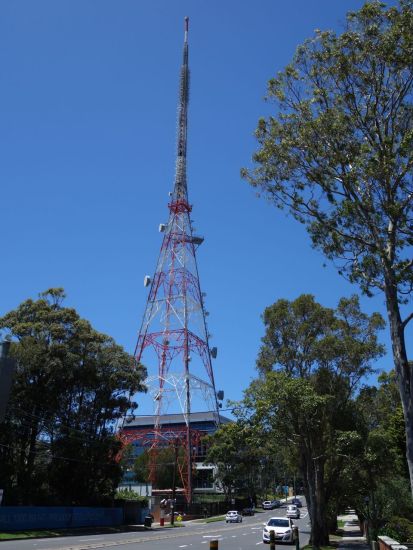 The transmission tower on the Pacific Highway is one of the few remains of the ABCTV complex, most of which was demolished in 2007. The fences are draped in advertisements for Gore Hill business precinct, but for now the site is just mounds of earth, the ABC building debris long since swept away. Things are going on in there though, a surveyor peers through a theodolite and under the tower gardeners push lawnmowers over the grass.

It stands out from its surroundings now, so it must have been even more striking when it was built in the 1950s. This was long before the neighbouring dark brick colossus of Royal North Shore Hospital was constructed and the highway was still mostly lined with houses. Sydney’s first official television broadcast – which began with Bruce Gyngell in front of a map of the world saying “Good Evening and welcome to television” – aired in 1956. The towers were a symbol of this new era of technology.

Photo from ABC TV at Gore Hill in the Fifties website.

Perhaps because of its highway position this tower is the smartest of the three, its paint bright and lawns neat. Its Artarmon counterpart’s paint is peeling, and it is packed in among water reservoir tanks, a substation and an apartment block, which must get either the best, or worst, television reception in Sydney. 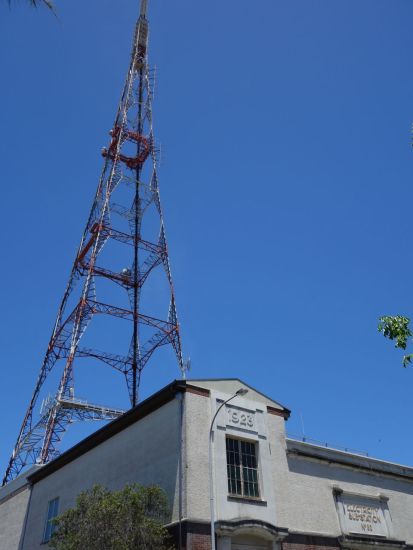 It stretches high up above the tree-lined streets below and the brick apartment buildings on Hampden Road. Like all the towers it is best appreciated from a distance. From the shopping strip across from Artarmon station with its endless variety of sandwich bars, the tower lifts your gaze skywards.

The third tower is the tallest and at 233 metres is the sixth highest structure in Sydney (the Eiffel Tower, by comparison, is 324 metres). It’s tucked away at the corner of the Channel 9 studios in Willoughby but is most often seen from the expressway below. It’s at the end of a dead-end street, surrounded by cyclone fencing with a warning against electromagnetic radiation on the fence to deter explorers. 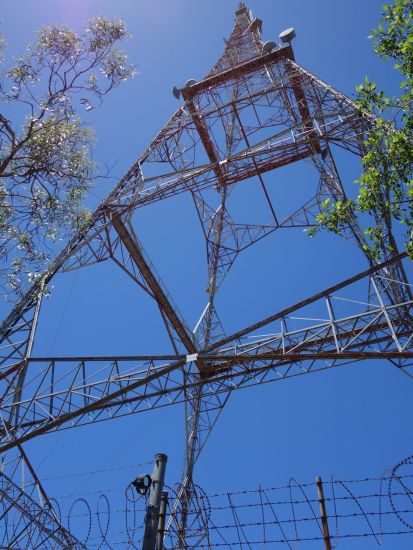 Apart from the roar of the traffic there’s little sound or movement. It’s hard to believe the tower is sending out signals across the city. Up close it’s a jigsaw puzzle of metal shapes, decorated with satellite dishes and flimsy stairwells for workers to ascend it. Beside it are cottages converted into offices for Channel 9, which have the odd character of homes where no one lives.

Across the street there are signs in every front yard, protesting the proposed development on the Channel 9 site. There are plans to relocate Channel 9 and convert the site into a residential development and current residents object to the density and height of the proposed buildings. Although the Channel 9 buildings would be demolished under the plans, the transmission tower would stay.

The towers once signified a new era of technology, but times have changed. Unwanted televisions lie discarded on  footpaths across the city. Mobile phone transmission towers have appeared throughout the suburbs and the air is full of unseen signals. The analogue tv signals which have been broadcast for almost 60 years are to be switched off on December 3rd. Despite these changes the Artarmon Triangle towers remain, rising delicately into the sky from the suburbs below.