From across the street the ghost signs are visible, Capstan Tobacco, Craven A, Bushells Tea, Taubman’s Paints. Two plaques announce Foords Buildings in curling letters. These words, while they are the oldest of all those visible on the row of shops, are cast in concrete and more enduring than the fading paint.

On street level there are a few shops still operating. A secondhand book store, a tailor, a liquor store in a low building that must have once been a bank. A couple of shops have For Lease signs in the windows. Others have an ambiguous appearance and it is hard to tell what, if anything might be behind the closed doors. Most of the clues to what these shops used to be have disappeared, but there are a few traces left. Cigarette ads still cling to the orange tiles on either side of a once-milk bar. On one of the ads a blonde man in a turtleneck jumper smiles from behind his pipe, filled with Borkum Riff, superb pipe tobacco from Sweden. The corner of the ad has been chipped off where someone has tried to remove it, but Borkum Riff clings on.

Foords Buildings are at the corner of a five ways intersection. The additional road gives the impression of paths scattering out, leading in all directions. The space has been carved up by the roads and the buildings sit oddly on their corner blocks. Across from the row of shops is a triangle of land with a tall white building on it, set back from the road. Until recently it housed a piano rental company and the signs are still on the windows, advertising pianos from $1.10 a day. Another corner has the Canterbury Club Hotel, a grand 1940s building with a row of winged horses on the parapet and a giant lantern on the roof. Across from it is the station and then, on the final corner, is the old post office, which has been repurposed into a pole dancing studio.

The row of shops are a patchwork of signs and coloured awnings, and on street level there are only the smallest of details to notice, collections of glass company stickers on windows, fragments of signs and tags under layers of road grime, the faint smell of chlorine outside the pool shop with its window display of a jumble of inflatable creatures. The “Out of Print” bookstore has old books with marbled edges in the window. It is the only store with a window display to loiter over. Most of the facades have the curtains drawn, the doors shut. The convenience store has shelves sparsely stacked with miscellaneous goods, dusty Santa hats and packets of toilet paper.

Cutting through the row of shops is Aldi Street. Once there was a building here called Sunrise Hall. On it the symbol of a rising sun was cast in relief under the date of construction, 1922. Eighty years later the Sunrise Hall was demolished, the only trace of it to be found on one of the two metal plinths in Aldi Street. One displays an information panel with the story of the Sunrise Hall and the building preceding it, the Rising Sun Hotel. The panel notes that Sunrise Hall was “recorded and demolished in 2003”. The panel from the other plinth has been stolen, leaving only a rectangle of grimy plastic. At the end of the lane people wheel trolley loads of groceries and Aldi weekly specials – steam mops, hedge trimmers, electric guitars – to their cars.

The city produces Aldi supermarkets now, not places like Foords Buildings or the Sunrise Hall. This shift isn’t new, late 19th and early 20th century rows of shops have been in decline since the proliferation of shopping malls in the 1970s and 80s. Yet almost every suburb in Sydney has a row of shops of some kind, many of them constructed in the early 20th century. Those in peaceful locations fare better than those on the main roads, subject to traffic of an intensity that wouldn’t have been dreamed about when the shops were first constructed.

As with all busy Sydney roads, it’s hard to walk along Canterbury Road without a feeling of struggle. Its traffic is heavy enough that to walk beside it is to feel vulnerable, rattled by the noise and proximity of the buses, trucks and endless cars. This is the kind of experience that has inspired the serene architectural drawings of various masterplans. One day Canterbury Road, like the much busier Parramatta Road, will be converted to a tree-lined boulevard, with pedestrians strolling past the pavement cafes. These bland future scenes with carefully balanced ratios of people, trees and buildings, are dreams. They seem as remote as past plans for the city like the mid-twentieth century projections of Charles Beauvais, of a future Sydney with the sky buzzing with hovercraft.

There is no stretch of road with more run down rows of shops than Parramatta Road. Travelling the length of the road is a tour of eccentric details housed in a ragged assembly of old buildings in varying states of repair. Such a tour, taken by many thousands of motorists daily, includes an array of curious sites. There are anachronistic businesses, of which the Olympia Milk Bar is the archetypal example. Signs for extinct businesses and products decorate the upper levels of buildings, such as the ‘Arcade’ building in Leichhardt which features a gallery of extinct beers in painted ads on the front. (The ad for KB “Cold Gold” Lager, cunningly placed where motorists driving home would see it with the sunset in the background, has since been painted over.)

There are DIY oddities, the mannequins playing the piano on the awning of the piano tutoring building in Summer Hill, and signs for obscure businesses, like the Guard Dog Training School advertised in the yard of E&M Unique Motors, which pictures a slavering clipart hound of hell and offers “award winning video available”. The ruin of the Brescia furniture showroom like an asteroid has struck it. Giant teddy bears watch the traffic from the window of a Burwood florist, the gatekeepers at the edge of the inner western suburbs. Caryards are decorated with palm trees, islands inhabited by metallic beasts, sometimes basking upon cement rocks. Occasionally, a stray helium balloon escapes from a caryard and floats up above the traffic and away. 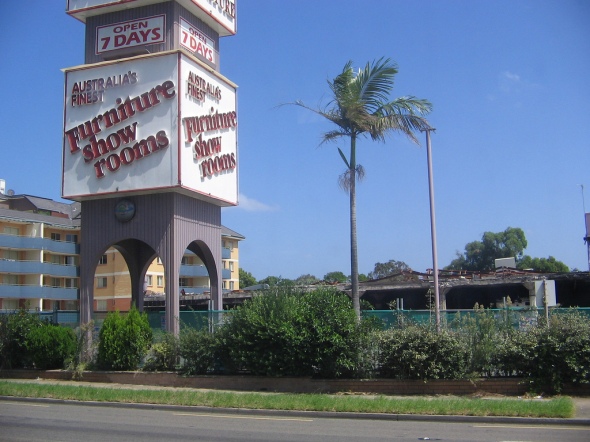 Brescia in 2006, a year after the fire. These days it has sunk into even further decay.

If all these strange tidbits prove too much, the turnoff to the M4 motorway approaches. Just before it is a row of shops that is maybe the most run down in Sydney. It’s hard not to feel sorry for them, wedged between Parramatta Road and the M4, and to feel the encroachment of the traffic. Most of the shops are empty, the businesses closed down or relocated. 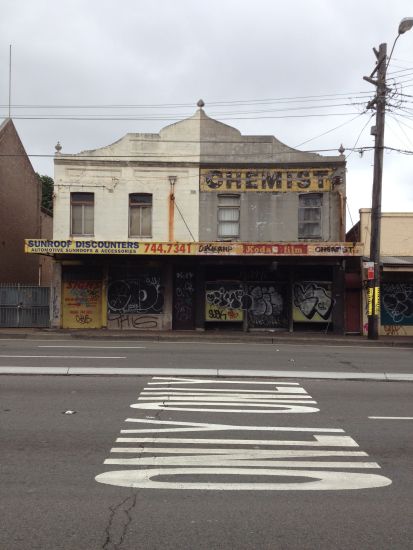 A layer of black soot covers every surface. Words are tagged over the walls like fragments of lost conversations: Arvo, Grime, This. Or on other walls there are so many months of bill posters the corners form a thick, curling rind. Among all this the Da Franco Restaurant is open for business, its folding sign propped up outside on the pavement. Inside there are pictures of Venice hanging on the wall, an upright piano in the corner, potted palms and chalkboards in the shape of scrolls with the specials written on them. In here, you can forget the surrounding disaster of boarded up facades and diesel soot, although the sound of the surging traffic is omnipresent.

Beside the restaurant is a small laneway which leads to the suburban streets behind. The laneway was once lined with shops but now the windows are painted over and it’s a minor thoroughfare, used as a Parramatta Road escape hatch by restaurant patrons and people going to and from the bus stop. Along the length of the laneway the walls are painted green which gives it a peaceful, cool feeling, like stepping into a forest. In one window an old ad bursts out in dimensional text: Shelley’s Famous Drinks.

Further down the row the curling letters of Karp Chemist have fallen askew and pigeons roost on the beams of the awning. Like many suburban pharmacies the awnings display ads for photo processing, the Kodak red and yellow now faded and peeling. Photo processing advertisements are one of the more common ghost ads. Still, in some places, old boxes of film float above awnings. Like video stores signs and they are the last public reminders of technologies of the recent past.

Soon they will slip from view. The ads will decay, the buildings will renovated into functional spaces again or demolished and replaced. For now they await their disappearance. Their shabby emptiness can be difficult to romanticise when I’m standing there with the traffic roaring past. Latching onto the old signs and the few architectural flourishes does little to counteract an overall sense of entropy.

In the The Revolution of Everyday Life by Raoul Vaneigem, a Situationist text from 1967, he describes a tension between observation and imagination:
“no sooner do I become aware of the alchemy worked by my imagination upon reality than I see that reality reclaimed and borne away by the uncontrollable river of things”.  My thoughts flicker towards wanting to transform this almost-ruin, to pick up the details and bring them to some kind of imaginative life where it is reconstructed or redeemed.

Yet my imagination’s alchemy is limited. I prefer to observe these buildings as they are: their power lies in their latency. That they continue to remain, at least for the moment, seems a small miracle in a city I am told is obsessed with real estate, property values and location. It is inevitable that one day these places will be brought back into use. Whatever their future – apartment blocks or a renovated string of period shopfronts containing cupcake bakeries and boutique real estate agencies – for now just to take notice is act of imagination enough.