The arrow points towards the underground passage, urging me to “Keep on Walking”. Ahead of me is a white-walled tunnel, its curved ceiling and unadorned walls making it more resemble one of the hallways from Star Wars than a pedestrian underpass. There are no advertisements on the walls, no graffiti, just a string of round, black ventilation grilles that look like portholes, and two stripes of fluorescent lights along the ceiling.

This is one of my favourite Sydney tunnels. Its starkness is a respite from the visual clutter of the city, as if I’ve slipped into a connecting piece between the present and the past, or some other kind of Sydney. Even at peak hour it’s not a busy thoroughfare. More often that not I walk through it alone, expecting a band of Stormtroopers to come marching out from exit midway along it. But the only action is the few pedestrians heading between Museum train station and the office buildings above.

The Star Wars connection is not as much of a stretch as it could be: the underpass was built in the late 1970s, around the same time as the film was in cinemas. It was part of the Hyde Park Square development of two office towers and an underground arcade and sunken plaza, all connected to Museum station by the tunnel.

I reach the end of the tunnel and it widens out into a shopping arcade. On one side is one of the few remaining ceramic murals by Vladimir Tichy. It is a long wall of textured, bark-like tiles, with sets of vertical bars made from glazed, white bricks, which look like spears of bamboo, or stalactites on the roof of a cave. On one panel is the marker’s mark, carved in relief into the clay: Designed by V. Tichy, 1977. 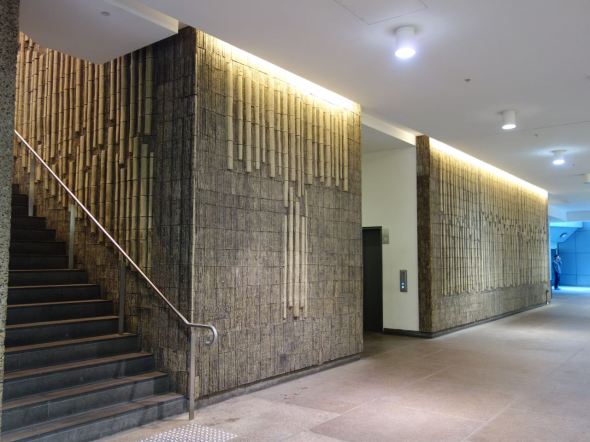 Tichy is a ceramic sculptor who came to Australia in 1968 from what was then Czechoslavakia. He set up a studio in Parramatta, from where he produced many large-scale ceramic murals for public and office buildings, RSLs, and civic centres. There were once many Tichy murals in the city, but now the only other ones are in the lobby of Macleay College on Foveux Street, and at the entrance to Newton’s Pharmacy on York Street. The rest have been destroyed as 70s buildings are renovated or demolished. 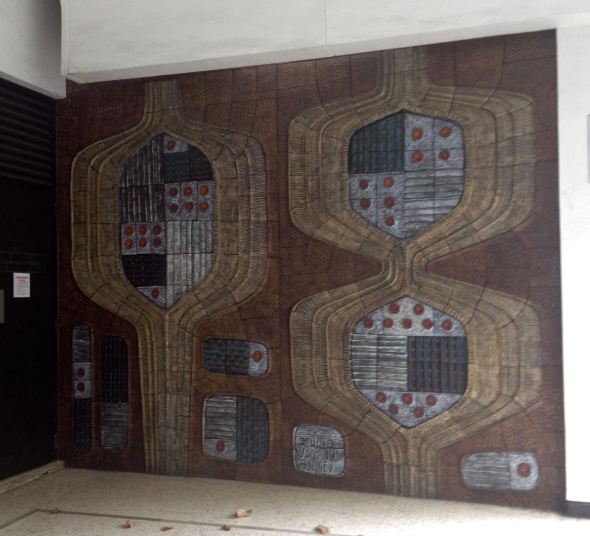 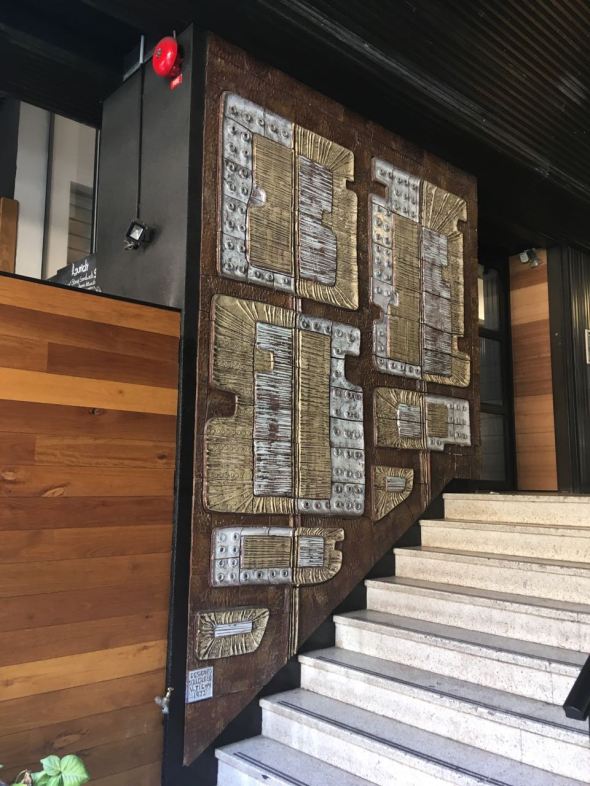 Beyond the mural is the square itself, a sunken plaza between the two buildings. Designed for office workers’ lunches it had clusters of chairs and tables and a big, curved concrete bench you could either side on the inside or outside of. Now most of the square is taken up by a childcare centre, with soft artificial grass and a sandpit.

Once I reach the square I turn back towards the bright, white tunnel. It hadn’t always been so stark. In the 1982 book Subterranean Sydney by Brian and Barbara Kennedy it is described:

A new sixty-five metre tunnel under Elizabeth Street was opened in 1978 to take pedestrians from the complex to Museum Station. The new tunnel was given a modern-art atmosphere with wide bands of colour. The smooth lining of the tunnel was made of a specially toughened material and was said to be vandal proof.

At first, the white paint seemed to cover the wall panels so well that there was no hint of what colour it must have been before. The white paint extended tightly into the cracks, from floor to ceiling. I stood up close to it, scrutinising its surface, looking for the tiniest flake or chip to reveal the layer behind it. The surface was slightly rough, but uniformly off-white: it gave nothing away. I stepped back and looked around the tunnel, towards the side exit. Here a metal arrow on a pillar gestured obscurely to the right, devoid of any other guiding information.

I looked back to the white walls of the tunnel and saw something I had not yet noticed. Just visible was a slight change in texture, in the shape of a diagonal line. I followed it with my eyes. Near the curve of the ceiling another line intersected it at right angles. Then another line intersected that. I walked slowly along the tunnel, my eyes on the lines, and they came into life, diagonal stripes and squares. All of a sudden I notice a line of scraped marks at the bottom of one of the panels, which revealed slivers of bright green underneath the white coating. The next panel was scraped too, revealing yellow.

As I stood in the white tunnel it flooded into colour in my mind’s eye. Diagonal bands of green and yellow came into bloom. I felt a transformation come over me, too, as if I could, in that moment, see through time. Opening my notebook, I quickly sketched out the lines and shapes. 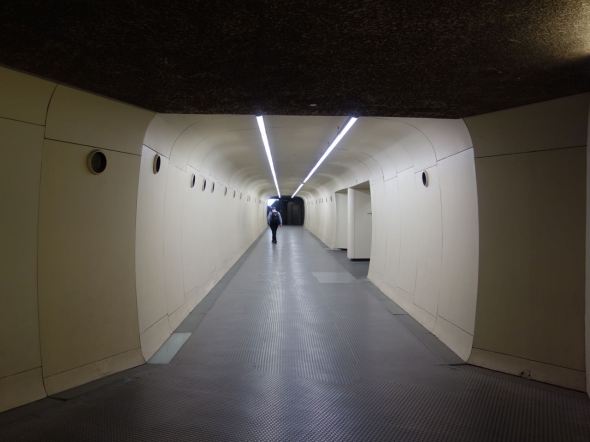