Past Addresses: the Roycroft and Rowe Street

When I pick up the book I have requested from the stack of the university library, I see that it used to belong to the Roycroft, a subscription library and book store that once operated in the city centre. Across the book’s plain black hardback cover is affixed the Roycroft’s yellow sticker, with the name and above it drawings of two fish with big eyes and long noses. Below it is the address:

Rowe Street, that narrow street of boutique stores, studios and cafes, emblematic of mid-century Sydney’s artisan and cosmopolitan cultures, was long-gone by the time that I came to know the city. In the early 1970s the street was demolished for the MLC Centre, and now all that remains of it is a short stub of a laneway off Pitt Street, just south of Martin Place, and there is little reason to turn off along it or even to notice it. But Rowe Street’s traces are still around, in the objects that were bought, made or exhibited there, and sometimes I come across them. 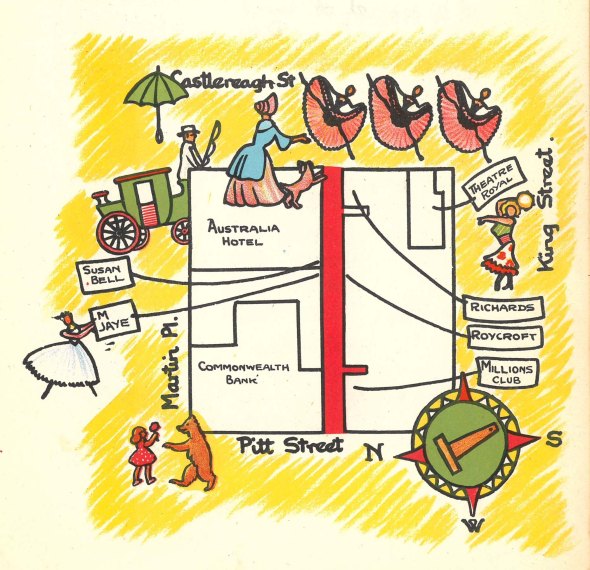 Map from “Tales of Rowe Street” by Margaret Mary Pearson, 1947. 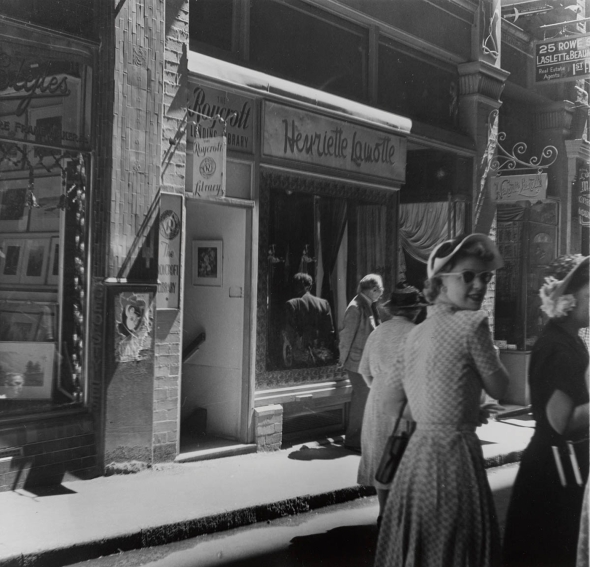 The Roycroft was a bookstore and subscription lending library which moved to Rowe Street in the early 1920s. In this photo from around 1950, the entrance to the library is beside the Henriette Lamotte milliners, in which one could make an appointment to try on elite, Parisian-style headwear.

If books were more your thing, you would have followed the steps down from street level to the basement where the Roycroft library was to be found. At the time such subscription libraries were commonplace in the city, often combined with bookstores. Unlike public libraries, these were privately operated, and allowed patrons to borrow books for the cost of the subscription fee: the Sydney Mechanics School of Arts Library still operates on this model.

The Roycroft was known for its literary collection, as well as being a place where banned books could be bought, although to put this in perspective, book-bans were common in Australia in the 20th century, and included such works as Aldous Huxley’s Brave New World and George Orwell’s Down and Out in Paris and London as well as pulp and genre fiction that was deemed too lurid for the Australian public’s tastes. 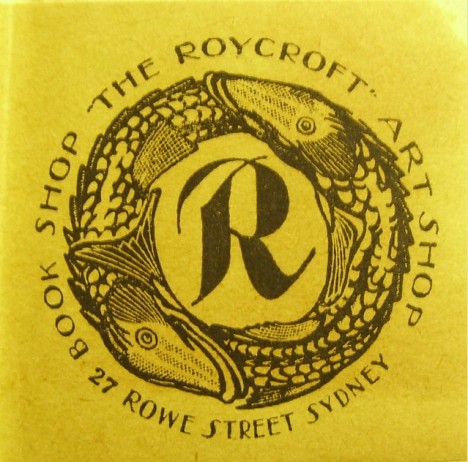 In the 1920s the Roycroft was owned by Francis Zabel, who commissioned the artist Adrian Feint to design the logo for the store. She had a liking for fish as an emblem and her personal bookplate, also designed by Feint, featured a similar design. It is reminiscent, too, of the “wise men fish here” sign for the Gotham Bookmart in New York (thanks Melissa for suggesting the resemblance).

The sign for the Roycroft was so appealing that, in 1954, it was stolen and, as far as records show, was never recovered. I can’t but wonder where it might have gone. Perhaps it was a prank and it was destroyed. Maybe it’s hidden somewhere, yet to be found. Maybe it is hanging on the wall of the granddaughter of the thief.

Bits and pieces of Rowe Street can be found in the city’s secondhand stores and auction houses. On my desk I have a print in a white-painted frame, small enough to fit in my hand, of a painting of trees. A tree with a silvery trunk stands in front of a cedar tree with wide-spreading branches. I bought this picture from an op shop, liking the close-cropped view, which makes me feel as if I am looking through a tiny window. On the back of the frame, written in faded fountain-pen ink, is ‘Stanley Spencer, “Cedar Tree”‘, and a sticker showing that it was purchased from Notanda Gallery, at 41 Rowe St.

The Notanda Gallery, operated by the painter Carl Plate, sold prints, posters, art books and postcards, and was one of the few galleries in Australia at which European modern art was displayed, and where art students and artists could have ready access to reproductions of these artworks in colour. This made it something of a hub for artists, where as well as buy prints and postcards, they could browse and discuss art. That the shop fostered a community as well as being a commercial enterprise is a common story for Rowe Street businesses. 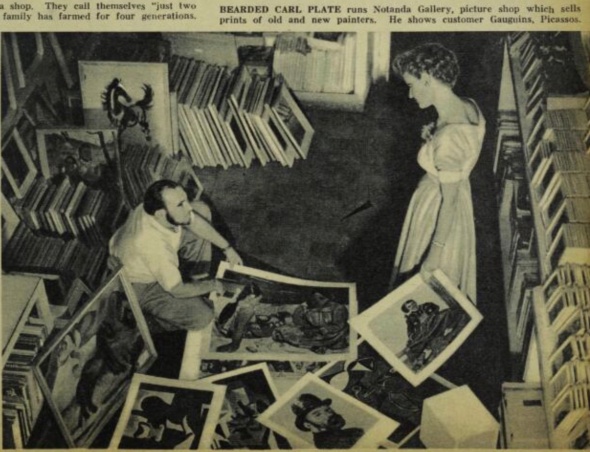 Looking at the little framed Stanley Spencer painting on my desk, sometimes I think about on whose wall it might have hung, or what it was about the scene that had attracted someone to buy it in the first place. Spencer is a painter best known for his visionary paintings of the English town in which he lived, Cookham, and his recasting of Biblical stories in these surroundings. But these trees have only their everyday transcendence, in their silvery green and spreading branches.

Soon after the library book and the framed print made themselves known to me, another Rowe Street detail appeared, one that had been with me without me realising it. One afternoon, sitting in the armchair in my office, I dropped a pencil and it rolled underneath the chair. Kneeling down to retrieve it I paused a moment, enjoying the unusual view of the room inverted. I’d never considered the underside of the armchair, which is a FLER chair loaned to me by Kate, who shares my love of secondhand objects. After she gave it to me I’d carried it down the hall and put it in place without further inspection. But now underneath I could see the stamp on the wooden frame, for Kalmar Interiors, Rowe St. 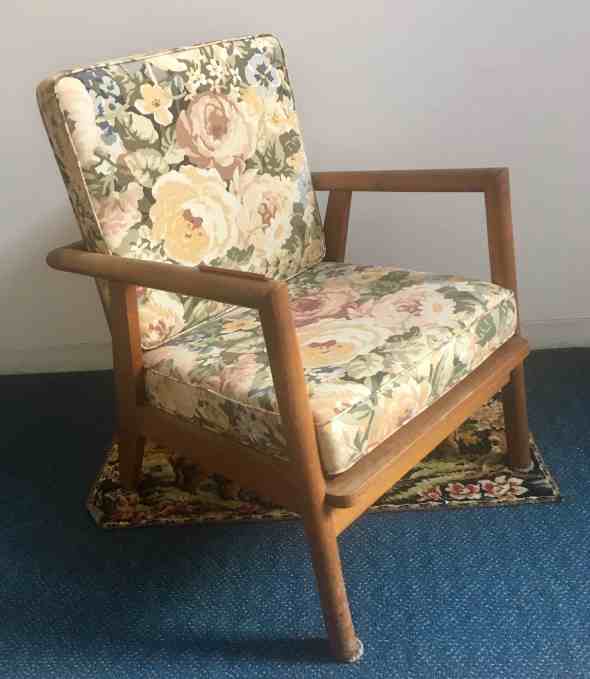 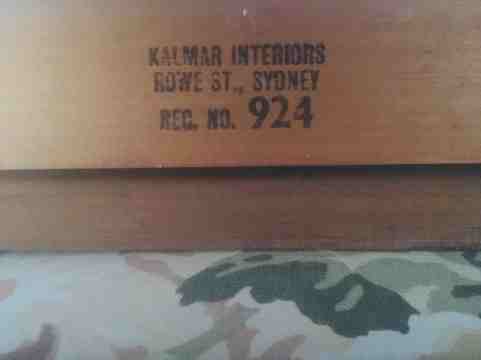 Kalmar Interiors was a furniture and interior design showroom run by Steven Kalmar, one of a number of designers who had migrated to Australia from Europe after the second world war and brought with them current trends in modern furniture design (stories which have been collected in Rebecca Hawcroft’s excellent book The Other Moderns). The FLER chair – made by an Australian company that was influenced by the lightweight, elegant forms of Scandinavian design – is a good example of the kind of furniture that shoppers bought from Kalmar. It’s unfussy but elegant, and I could well imagine it being part of the kind of scene described by Kalmar in his book You and Your Home. 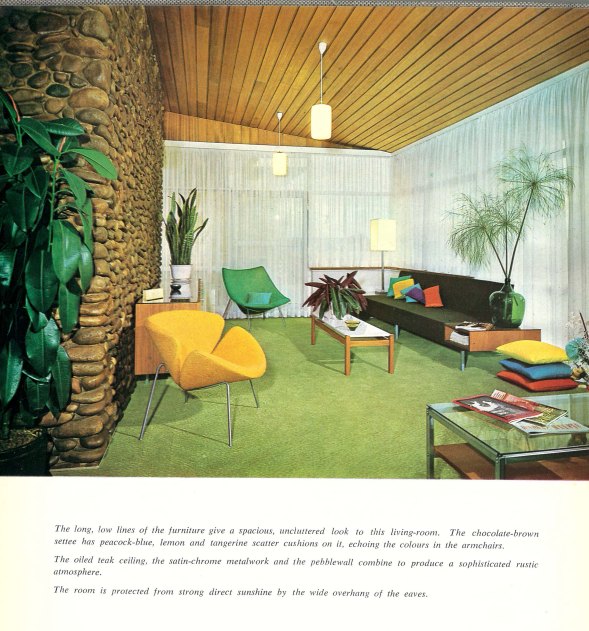 And so it is, with the hats, and chairs, and postcards and books that were brought home from Rowe Street. They formed a part of people’s lives for decades, and as they disperse elsewhere, into other lives, they keep within them connections to this past place, and past era, of the city. Although some Rowe Street objects are held by museums, there are many others in libraries and personal collections. They appear, too, at random in auctions and in secondhand stores, waiting for someone to notice them, and the label which gives the address from where they came. Like it is an envelope, and we can travel to its destination.