Elizabeth Bay Road ends in a loop around which is a crown of apartment buildings, some grand, some plain. The more elegant of them were built in the 1930s, like the nine-storey, art deco Adereham Hall, a tall building with a concertina shape like folding screen. It catches the afternoon light like it is a sunbeam solidified, starburst motifs spreading out above its doorways and windows.

At the other end of the loop is its modernist counterpart, an apartment building named Deepdene. The side of it which faces the road is rounded like a giant pipe, and curved walls emerge behind it. Built in the 1970s, the building’s form was based on an observatory in Potsdam, Germany, known as the Einstein Tower because it was constructed to make observations to test his theory of relativity. Its Sydney counterpart is dedicated to luxury: despite the building’s size there are only four exclusive, double-storey apartments inside.

Elizabeth Bay is a gallery of twentieth-century apartment buildings, containing everything from studio apartments with ugly grey trodden-down carpet and views onto the wall of the building next door to elegant penthouses with verandahs that open out onto the harbour. Simon and I pause outside the gates to Kincoppal, one of these luxury complexes built in the 1970s. Through the gate we can see the apartment building rising up behind the 1868 house built for merchant John Hughes. Hughes gave it the name Kincoppal, which means “horse head” in Gaelic, after a horse head shaped rock formation near the water’s edge.

But it’s not Hughes, nor horses, that has directed us here: it’s David Bowie. In the 1980s he owned an apartment in Kincoppal, to which he returned for regular Sydney visits throughout the decade, until he sold it in 1992. We peer through the fence, imagining Bowie checking his mailbox at the gold anodised aluminium mailboxes that look like a wall of gold bricks. This is the only detail of the building we can see beyond the trees and landscaping. Like many homes of the very rich, the entrance gives little away. A congested garden of palm trees and a tall bunya pine screens the buildings from the road.

Overlaid on this moment – a Sunday afternoon, people going back and forth from their cars with grey plastic supermarket bags or luggage from a weekend away – is the otherworldly thought of David Bowie stepping out from the Kincoppal gates. Would he even have gone out for a walk, I wondered, not quite able to reconcile his superstardom with such a mundane activity. But it seems he did, according to musician and Bowie-aficionado Jeff Duff. In one of the “Bowie in Australia” articles that appeared after Bowie’s death in 2016 he was quoted: “He was very hard to recognise,” Duff said, “he was very casually, normally dressed, a dude wandering around in Elizabeth Bay, nothing stood out about him apart from that he was a very handsome man.”

We wander away from the gates, follow the loop back down towards Greenknowe Avenue. Hanging from the awning beside the row of shops on the corner of Ithica Road is a sign for the Elizabeth Bay Deli: DELI in curling script beside an illustration of a cheese and a salami and some lovingly-detailed black olives. 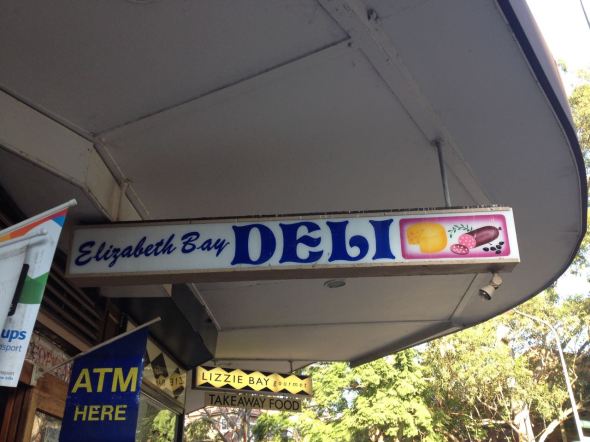 The shop is one of those stores that has at least one of everything. Whether you need a glue stick, a banana, a container of Bacon Bits or a box of incense, you’ll find it in there somewhere. Maybe it’s just because Bowie is in my head, but there’s grocery items in here I haven’t noticed again since the 1980s. Apricot nectar in a can. Cottees Ice Magic. Pecks Paste. The spices are the same brand I remember from our pantry in the 80s, Molly McKenzie, presented in round plastic bottles with brown lids.

I lurk behind the crisps, imagining Bowie at the counter, politely buying a packet of Marlboro Lights or maybe a box of juice. The Elizabeth Bay Deli has these items and more.