Heading north along Burwood Road I walk by house after house. Some are low, brick Federation-style houses, the kind that have wooden gables and front porches, although I see no one sitting outside on this weekday late afternoon. There’s still an hour or more of the work-day to go, but daylight has already started to fade from the sky, and the air has turned chill.

So I keep moving, past the roadside trees that have been cut into weird shapes to avoid the electricity wires, until I reach a curve in the road. Following it around I see up ahead that the factory I was looking for has all of a sudden become visible. Its tall metal chimney rises up from the central building, a high, wide block with long walls made of opaque glass, bracketed by two brick walls on each side like bookends. The view of the factory shifts the scale from domestic to industrial, although like the houses the factory is surrounded by gardens, which softens somewhat, the hard appearance of the industrial buildings.

Around the factory are landscaped grounds with tall, spreading conifers, and garden beds planted with clusters of agapanthus. I look in through the fence and read the text on a sign beside the driveway that runs down along the office building closest to the street: Green Bean Deliveries: Please report to Bean Storeman immediately upon arrival. On the side of the central factory building is another clue to the goods produced inside: a huge letter B, white against the bricks, two-storeys high. Within the top loop of the B is a tea leaf, and within the lower one, a coffee bean. 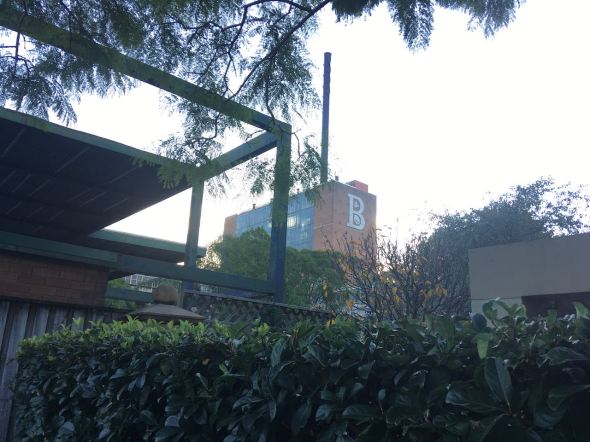 The Bushells factory began to operate here in the late 1950s, after moving their roasting and blending operations from Harrington Street in The Rocks, to this larger site further west in Concord. Bushells was the first Australian tea company, and was strongly established by the early 20th century. They were prolific advertisers, with ads being painted on the exterior walls of corner stores across the country, leading to there now being many Bushells ghost signs out there for the finding. In Canterbury Road in Belmore is one such sign, with a traffic-related message: “STOP for Bushells, Go refreshed”. Underneath this, behind the slim trunks of casuarina trees, is a carefully-painted box of the signature Blue Label blend.

The factory is on Wangal country, on the south side of the harbour, as the river moves west towards Parramatta. The peninsula had, before colonial intervention, been woodland on the higher ground with mangroves by the water’s edge. The colonial claims on the land saw that this area, as with much of the swampland that had made up the harbour foreshores, was filled in for the purposes of industry. Beginning in the 1920s, it had taken 12 years of depositing rubble here to “fill the hungry swamp”.

Now instead of the hungry swamp is a golf course and a park, and estates of apartments and townhouses that have replaced the timber mill and the metalworks that had also once operated near by the water. But of all the structures here, the Bushells factory dominates the headland, a symbol of colonialism both in the immediate sense of the changes to this land, and in the wider history of tea as a commodity.

Turning in through the entrance to the golf course I follow the path that runs along its edge, by the tall wire fence of the factory site. An earthy smell of coffee drifts over, although the factory’s operations are much reduced, ahead of its imminent closure. A residential development is planned for it in the near future, taking advantage of its waterside position, part of the general move towards deindustrialisation of this area.

As the sun moves towards the horizon the sky turns golden, and its glow is reflected in the wide glass wall of the central factory building. From where I’m standing at the edge of the golf course, the building has the look of a giant radio set, its chimney like an aerial. Or a giant juice carton, with the chimney the straw. I look through the tall wire fence at it, making up analogies, as steam billows up from the side of the main hall, white puffs that drift upwards and dissipate.

Then I turn towards the harbour. The water in the bay is flat and glassy, shining with afternoon light, as if it is a bowl which swirls the colours of the sunset inside it. Sky and water seem a perfect mirror of each other, and for a moment, all other details recede.