These rainy grey October days have seen me looking through my papers, trying to arrange them in some sort of system. I’m a haphazard archivist. The activity of sorting rarely leads to anything but me surrounded by books and papers, sensing how each one resonates with its own story, so it’s impossible to discard any, and easy to become sidetracked rather than instilling order.

Today I’ve spent the day sorting the Sydney Scraps category, which is an unruly mixture of pamphlets, guidebooks, photos, postcards, and miscellaneous ephemera. They resemble the bundles of papers one returns with after an international holiday, the importance of each scrap heightened by its dislocation from everyday life. In this case, it’s a time-traveller’s dossier, each scrap accrued from a visit to a Sydney of the past.

First let’s visit Sydney of the late-1950s, via a pamphlet produced by the prolific New South Wales Government Tourist Bureau. Such pamphlets were intended to be functional documents that informed the visitor to the city of the potential activities and experiences to be had during their visit. They usually made an attempt to describe the city’s character and atmosphere, as well as create a sense of excitement and anticipation. This combination can lead the time traveller into some unexpected terrain.

What expectations does this view of the city’s business district create, with this sensible Martin Place streetscape? They may not be the adjectives offered within:

By far my favourite part of this pamphlet is its itinerary for ‘8 Fascinating Days in Sydney’. It is not the suggested activities, so much as the breathless way in which they are described that makes me wonder: was the 1950s really a time when people expressed their frustration at leaving the camera at home by “whipping the cat”, when they had ventured out on a “memorable junket”? As for “penetrating the blue fjord of Middle Harbour”, and “lofty forest clad mountains come kneeling to the very edge of the Pacific”… I have spent a good while trying to imagine who might have written the copy for this brochure and believe them to have been an avid reader of romance novels.

In 1970 the New South Wales Government Tourist Bureau has a more down-to-earth copywriter, although the brochure cover image is the opposite, revelling in the view from Australia Square as diners enjoy the “smorgasboard brunch” in the foreground. As well as a lovingly-rendered illustration of the Kings Cross Village Centre, there is a chart of costs which has the time traveller excited at the 18c middies that await.

The New South Wales Government Tourist Bureau also produced weekly guides in the late 60s/early 70s, with listings of shops, restaurants and entertainments. In the introduction to the 15th-21st June 1967 issue, Lord Mayor John Armstrong praised the city’s unique features, including its “adequate facilities for sporting activities”. No risk of hyperbole there.

My main attraction to guides of this nature is that they enable me to go shopping in the past.

The forlorn-looking tiger, please. The guide also includes what is now a ghost tour of Sydney’s arcades: only the Strand remains.

Visitors would have read these pamphlets and those like them, have laid back in their hotel beds reading over the listings of coffee spots and theatre restaurants, have crushed them into handbags and into suitcases as they packed to go home again, some keeping them as souvenirs of their time in the city. I often wonder by what sequence of events they have made it into my possession. There are rarely any clues to know what the travellers who kept these brochures thought of the city, but in one case, I know. 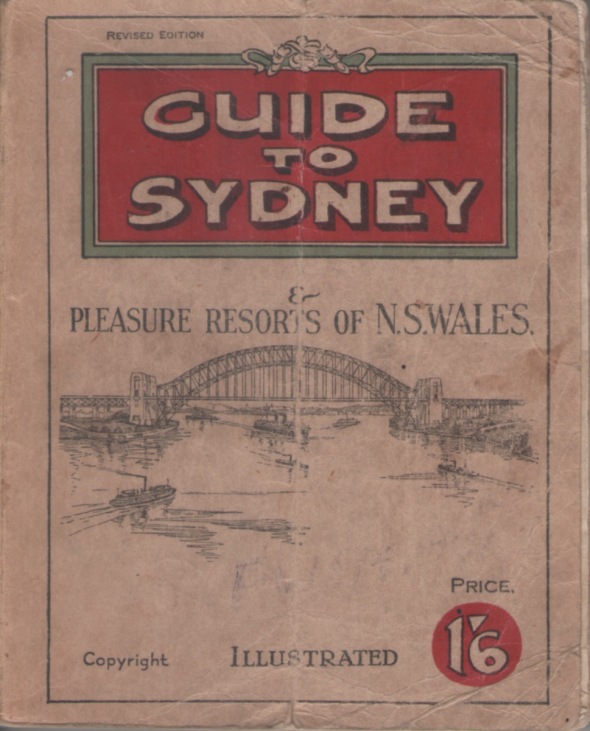 This 1920s guide to Sydney used a sketch of the then not-yet-completed Harbour Bridge for the cover. It’s an interesting little book, given to me by my friend DL, and has delicate, tissue-paper fold-out maps that show the city streets, ferry routes and suburban shires. It really warrants a post of its own, but for now, it answers the question of what at least one Sydney visitor thought of the city.

On the first page, in pencil, the name F.M. Smith is written, with the date, 22/2/33. The Harbour Bridge was complete by then, but perhaps that wasn’t quite enough to win over some visitors. The only other annotation in the book is on the page set aside for the ‘Visitor’s Diary’. What was F.M. Smith’s impression of Sydney?