A Tour of the Sirius Building

Approaching the Sirius building I can see the group I am to join already assembled outside, waiting for the tour. They gather in the forecourt, a brick-paved area with circular garden beds, in which grow banksia trees and jade plants, and a hibiscus flowering with pink blooms. Among the people waiting there moves a tall man wearing a purple shirt. He is handing out flyers, talking with verve as he does so. This is Tao Gofers, the architect who, in 1976, designed the Sirius building, and has been working with the Save Our Sirius group to protect the building from demolition. 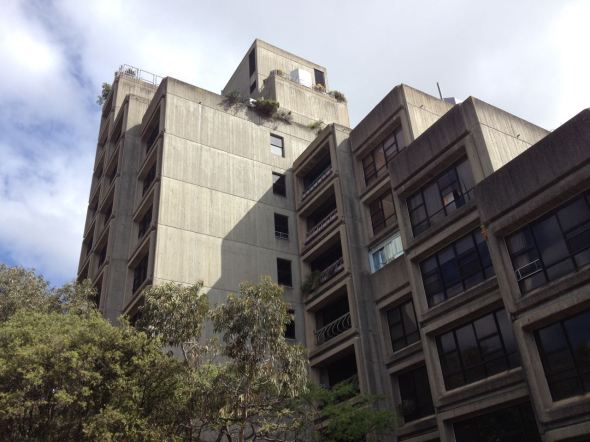 The Sirius is one of Sydney’s most iconic buildings, instantly recognisable due to its striking modular design and its prominent position beside the Harbour Bridge. Its stepped shape of concrete blocks and roof gardens with purple funnels rise up alongside the Bridge. It seems almost close enough to be able to reach out from the Harbour Bridge walkway to touch them. At least this is what I imagined as a child, as I, like generations of Sydney residents, wondered what it would be like to live there and explore on the rooftop gardens, looking out over the city.

The Sirius is a building that gives much to the imagination. It’s a people’s building, both because it was designed as social housing and operated successfully as such for four decades, and because it has such a strong physical presence in the cityscape. It’s a building that’s embedded in the city’s collective consciousness, as important and as controversial as it was when it opened in the late 1970s. 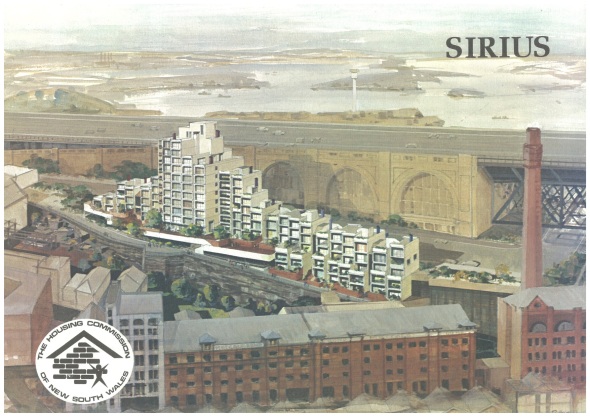 We are taken back to 1976 as Tao Gofers describes the process of designing the Sirius. At that time there had already been demolition of social housing properties and relocation of residents in the area. A condition of lifting the green ban that had been imposed on area by the Builders Labourers Federation was that that there be provisions for the working class community who had been living in the area for generations to remain in The Rocks. Until the Ban was lifted, the government could make no changes to their existing properties in The Rocks, and they were eager for the stalemate to be resolved.

The Sirius was the key factor in the lifting of the green ban. It all happened quickly: there was only 10 days between Gofers first hearing of the project to his presentation to the stakeholders. He describes the scene, the government officials in double-breasted suits, and the Rocks residents “like us”, people in their everyday clothes, who had gathered to see his proposals. He first showed a design for a small development of 14 terrace houses, which was unacceptable to the government. Next he showed a proposal for a 20 storey building with 8 apartments per floor, which was unacceptable to the residents. A third proposal, for a standard tower block of 80 units was also rejected for being aesthetically displeasing. Then Gofers presented the proposal for the Sirius. The design was presented as a compromise between two extremes, but it was the one that Gofers believed in, and the one that came to be built. 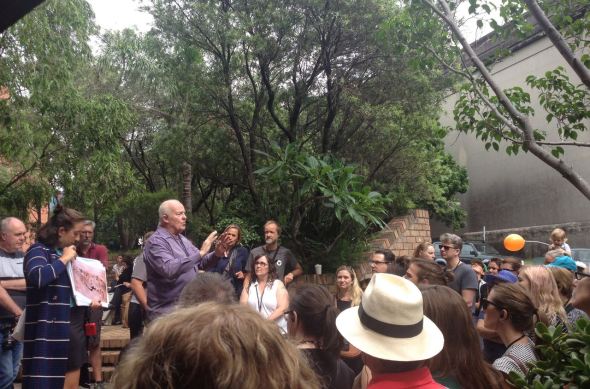 Sirius was based on The Laurels, an earlier apartment development Gofers had designed in Sans Souci. The model for The Laurels had been made with Revlon eyeshadow boxes, which had the right kind of dimensions for the windows that filled the ends of each concrete module. The Sirius was an expanded version of this design, which combined 1,2,3 and 4 bedroom apartments, as well as apartments specifically designed for the elderly and people with disabilities.

We walk around the building, looking up at the apartments as Tao describes how of the 79 units, 74 have access to a balcony, terrace or roof garden. “If you have just little boxes,” he says “people aren’t going to be happy.” His designs were made with people’s emotional bond to their homes in mind. These were not purely functional spaces, although their simple design made them adaptable to the multi-level site. It included numerous communal areas, including the Heritage Room on the 8th floor, designed as a common area for older residents, and the Phillip Room on the ground floor, with red patterned carpet, wood-panelled walls, and dramatic beams of raw concrete. 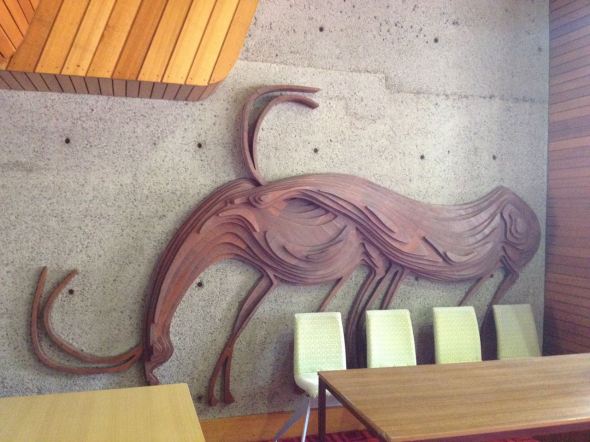 The wooden figures that decorate the walls of the Phillip Room.

We cannot even glimpse into the Phillip Room now. The windows are completely blocked off with black plastic, for no other reason but to prevent us looking inside. All we can see is our own reflections moving by. The group is big, around a hundred people. We stand at the back of the building, staring up at the apartment balconies where succulents grow wild and unpruned from the planter boxes. Almost every one of these apartment is empty. The government has been moving residents out since 2014, with the intent to sell the building and have it demolished. Despite the recommendations of its own Heritage Council, heritage listing was refused, and it is this decision Save Our Sirius campaign is working to fight.

Accompanied by security guards, we crowd into the foyer, and then go in small groups in the lift up to level 10 for a look inside Myra’s apartment. Myra, who is 90 years old and has lived in this neighbourhood for almost 60 years, has become the face of the Sirius building. Myra is blind, and has no wish to move away from the familiar apartment and area she has been a part of for so long. This morning she is at the front of the building, sitting in the forecourt with a drawing group assembled around her, sketching her on their notepads. Upstairs, groups of people stand in her living room, looking around. It is the homely environment of an elderly person, with its teaspoon collection hanging on the wall, framed photos and knicknacks arranged on the shelves, and a horseshoe hung up in the hallway as a luck charm. The windows fill the entire of the eastern wall and through them is a view across the harbour. 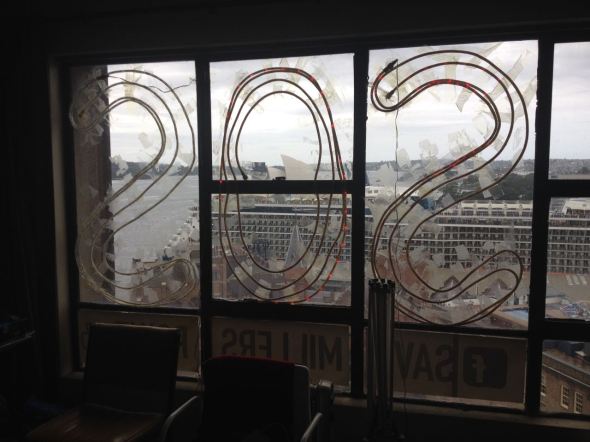 The SOS lights (for Save Our Sirius) in Myra’s bedroom window.

This, Tao says a number of times during the tour, is a sticking point – the idea of people who are not privileged, not wealthy, living with this harbour view. Standing in Myra’s living room, looking out at the clouds moving across the sky and their reflection in the steel-grey water, it is indeed beautiful. No one could deny it, and anyone living with such a scene as part of their daily lives is lucky. But luck and beauty should not be the exclusive province of the wealthy. A city where money and privilege dominates pales even the most glorious view. From its inception the Sirius has been symbolic of the city and the harbour being available to all, and it is even more so now as the majority of its apartments lie empty, and the fight to save it continues.

Follow the Save Our Sirius campaign here with links to details of future tours and campaign events.

The bright green carpet, the colour of grass in cartoons, absorbs my footsteps. The hallway echoes with sounds from elsewhere in the building, a click of a door shutting, a scrap of a conversation. The scene around me is as perfectly still, as if I am walking through a photograph from the 1970s. I’m moving through a cavernous space with towering beams and cylinders of concrete, inside the new William Balmain Teachers College, which opened in the Lindfield bushland in 1971.

In truth it’s 2015 and it’s the end, rather than the beginning. UTS, which inherited the college, has operated here since 1990, and has swapped this brutalist bushland enclave for a former TAFE building in Ultimo, and this campus is soon to close.

When the teachers’ college opened in 1971, a Sydney Morning Herald article described how: “If it were in Japan or Italy architects would make a special point of visiting it. As it is just in the backblocks of Lindfield on Sydney’s North Shore, not many people will see it”. Backing onto the Lane Cove River bushland, at the end of the residential streets that trail down from the Pacific Highway, it is perhaps not a place one might expect to discover a brutalist fortress. Designed by architect David Turner, it won the Sulman Medal in 1978, though it is only with the recent upsurge of interest in Brutalism, and the sale of the surrounding land for development, that it has come back into general awareness as an significant building. 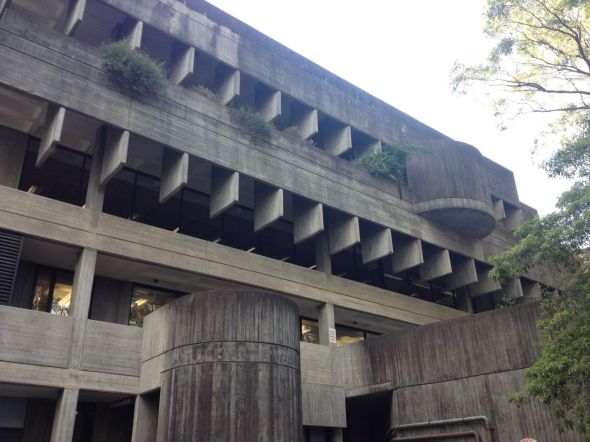 Constructed to complement its bushland setting, the campus is a five storey split level structure, a complex network of courtyards, bridges, spiral stairs and walkways. It’s part Italian hill-top village, part castle, constructed in raw concrete. Navigating it is negotiation a labyrinth of levels and stairwells, a game-like exploration through corridors, rooms and halls. 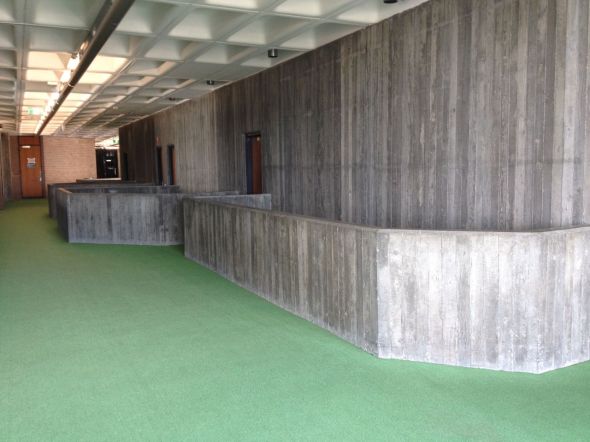 I get used to its spacious stillness and following its hallways at random becomes an adventure. I count the 1970s fixtures, circles of aqua vinyl lounge chairs, bright orange spherical light fittings, pink railings. In the same 1971 article that described the college’s suburban location the green carpet is noted as a surprising feature: “it must have taken a brave man to select such a colour for a public building”, Eva Buhrich writes, going on to detail the “sweeping balaustrades” that “just for the heck of it, are finished with lolly pink handrails”. 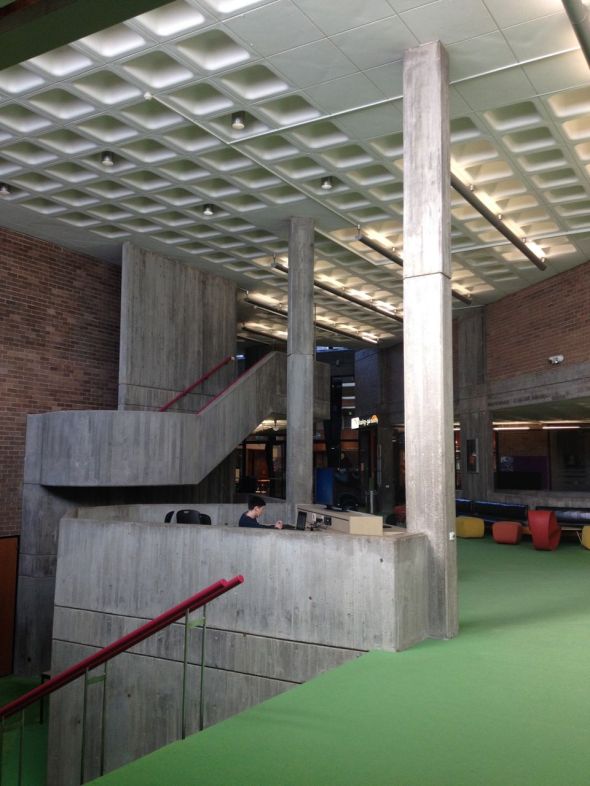 I pass a table of free books set out for people to take and stop to flip through education textbooks from the 1970s, with black and white photographs of children playing and sitting to attention in classrooms. The surrounding office doors are decorated with postcards and notes, but all are shut and there is no one in sight. I pass a pottery workshop with a row of glazed miniature heads, a window display of pottery deep sea fish, a display cabinet of counting apparatuses and a giant size slide ruler. 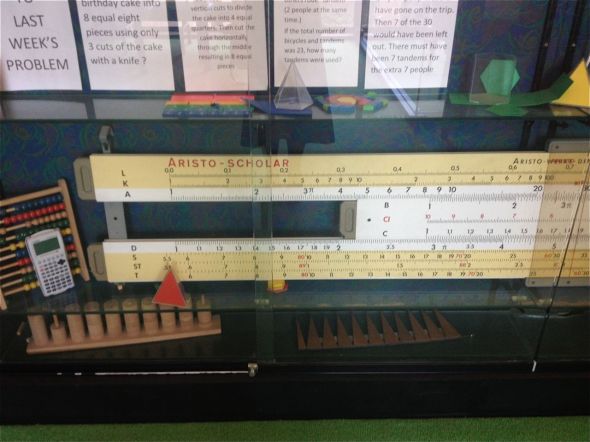 In 1955, the English architectural critic Reyner Banham, in his writing on the “New Brutalism” described how: “what moves a New Brutalist is the thing itself, in its totality, and with all its overtones of human association”. There is indeed something very total about the Kuringai building. Unlike its northern suburbs Brutalist contemporary – Macquarie University in North Ryde – this building folds many within it, into one complex, united structure. The slabs and cylinders of raw concrete have a monolithic presence, and seem almost of the same stuff as the sandstone of the ridge on which the university was built. This merging was accentuated by the landscaping by Bruce Mackenzie, which preserved as much of the surrounding bushland as possible, and incorporated roof gardens and courtyards planted with paperbark trees. 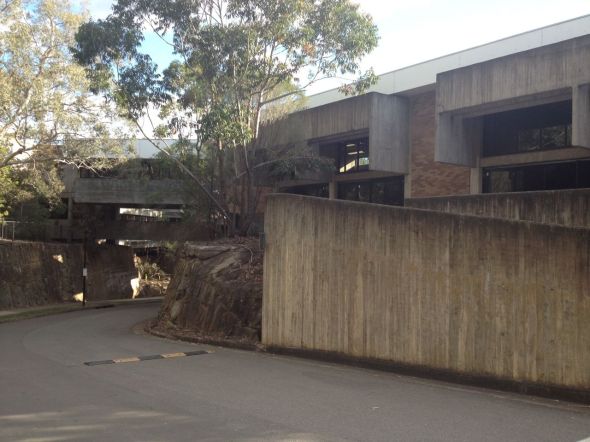 There isn’t much time to visit the campus as it is – the university semester is almost over, and farewell gatherings for past students have been planned for November, after which it will close. After the university leaves the building will be converted into Lindfield Learning Village public school, to open in 2017. In it’s proposal, although “many aspects of the building will be retained”, some “internal elements” will be assessed for their “appropriateness for a school”. I guess that means the bright green carpet’s days are numbered. 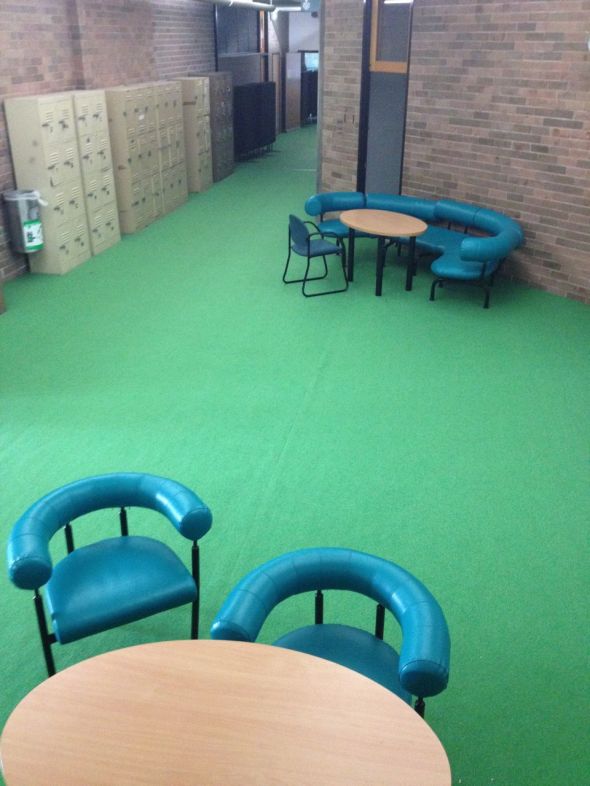 There are plenty of archival photos of UTS Kuringai here, featuring 70s hair, knee socks, boxy computers and clunky AV equipment, and the campus in its heyday.