← Clyde to Carlingford
The Abbey: Part 2 →

The air is bitter, the sun red as a traffic light, weak behind the haze. In the afternoons the light comes through the window in panes of weird bright orange. I consider the list of places that I had thought of visiting to write about for this month’s post, but to go outside is to breathe the acrid air and to see a pall of smoke clinging to everything. To feel the dread of the smoke not lifting, to see in my mind’s eye the map of the fires burning down the east coast and the photographs of the fire front and its destruction, and think of those who have had to flee or fight it.

On social media photographs of the red sun are accompanied by messages of dread. When I do go out to do daily tasks I can feel the tension and fatigue at the edges of every interaction. It is surreal to see everyday activities going on amid the white air. As I walk across the Domain there is a group of people playing soccer on the field behind the library, the tall city buildings behind consumed by the yellow-grey murk of the smoke haze. I hate to think of their deep breaths as they run. There are fewer people out than usual: the smoke stings in our eyes, catches in our throats. It takes a lot to slow a city, but the smoke has done it. 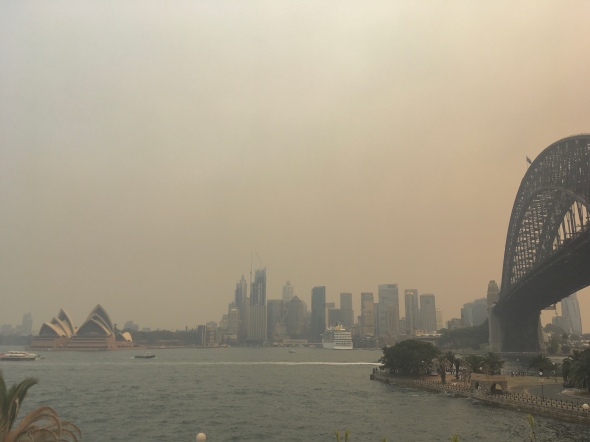 When I look up at the sky at sunset, see the red sun and the sickly orange light over everything, I think about a scene from the movie One Night Stand, set in Sydney and released in 1984. It’s an odd and somewhat awkward film, part teen romance, part apocalyptic drama. Four teenagers are inside the Opera House when world nuclear war strikes, and they switch between a goofy denial of the situation – drinking, trying on the costumes, and telling each other stories – and horror at the impending atomic doom. At first I found it amusingly kitsch but as the film progressed and the disaster unfolded, it became chilling more than anything. The scene that stuck with me was of two of the characters looking out the huge windows of the Opera House, up into the sky, which is bright red between the black clouds and flashes of lightning. A sick, angry sky that warns of the coming turmoil. A scene for uneasy times. 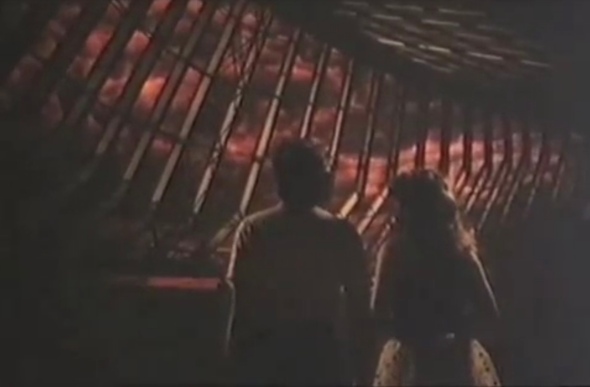 Often on Mirror Sydney I write about details, and try to suggest how they lead out into wider stories, but the smoke makes me do the opposite, to move from the large down to the small. The smell of the smoke creeps into the house, even with the doors and windows shut, and it’s hard to think of anything else, or any other story to reflect on. Unlike the film scene, it is not fiction, not speculation, and there is no turning away from it.