Terminus and the Suspension of Time

For most of the 20th century Pyrmont was an industrial area of factories and warehouses. By the end of the of century, though, a period of desertion and dereliction had set in. Few people lived in Pyrmont and most of the industrial buildings were empty. In 1992 the most striking of these, the Aztec-inspired, Walter Burley and Marion Griffin-designed garbage incinerator, was demolished. Now, as with most of Pyrmont’s former industrial sites, an apartment building stands where it used to be.

Much of the new Pyrmont still has the feeling of walking around in an architectural model. Crossing a square of lawn that provides a patch of green space for the residents in the high-rises the surrounding buildings are sharp, rectilinear. I can sense I am walking through a changed and charged landscape, although this settles oddly with the lack of other people in this space so carefully designed to be populated. 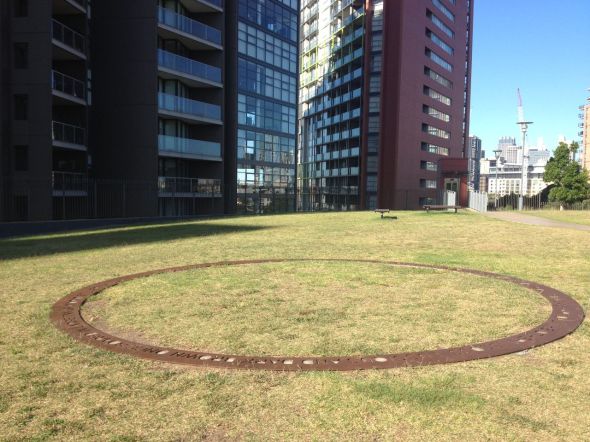 The park on the former site of the CSR distillery.

There is one place in Pyrmont which hasn’t changed though, at least not since the 1980s. The Terminus Hotel on Harris Street is a ghost presence, its multiple doorways suggesting it was once a place people crowded in and out of. But now, as it has been for decades, no one enters and no one leaves. Ivy has consumed more and more of its exterior so it seems more a living thing, a huge overgrown tortoise, than an empty building.

The name “Terminus” came from its proximity to the last tram stop on the Pyrmont line, but since the building’s abandonment it has become a fitting name for a place of suspended time. Above the tiles on the facade are fading, hand-painted ads for Tooths and Reschs, a painted glass of beer hovering beside the windowsill, and a banner proclaiming “The Big Event” This Week…

The Terminus has been waiting a long time for its next big event, and finally it is imminent. The hotel is up for sale, after being owned since the 1980s by the Wakils, the couple notorious for owning multiple city properties which have become increasingly more derelict through disuse. They steadfastly repelled squatting and productive uses of the vacant buildings, which have remained consistently vacant. These city-fringe properties became time-capsules of 20th century Sydney, the industrial and post-industrial city of warehouses and storehouses and workingman’s pubs. Now they are being sold one by one.

Inside the Terminus the circular bar, from the days of propping up six o’clock swill drinkers, has a thick layer of dust, and the paint peels off the walls. There is a different time-scale at work in here, dominated by the gradual processes of material decay. The smell of old plaster and damp leaks from under the doors out into the street.

As I peer through the windows of the Terminus a group of people on the other side of the road watch me. They’re sitting on a bench outside the Pyrmont Point Hotel, an older pub than the Terminus, but renovated and operating as a bar and bistro. This pub was originally known as the Land’s End, from the days when Pyrmont was a remote place at the edge of Sydney. Drinkers there must see a lot of people skirting the Terminus, peering in the windows, wondering and speculating, a number which will surely only increase since the announcement of its sale.

I leave the Terminus and walk back along Harris Street, passing a steep, empty lot, very overgrown, sealed up with a fence of sandstone pillars and corrugated iron. I take a path which leads behind a row of townhouses. It zigzags up towards the top of the ridge. Up here there is a mixture of new and old terrace houses interrupted by a disused parking lot, the parking spaces inscribed with the initials TR. The lot stretches out, a place of pause. Thick tufts of grass grow through the cracked tarmac like little furry monsters. 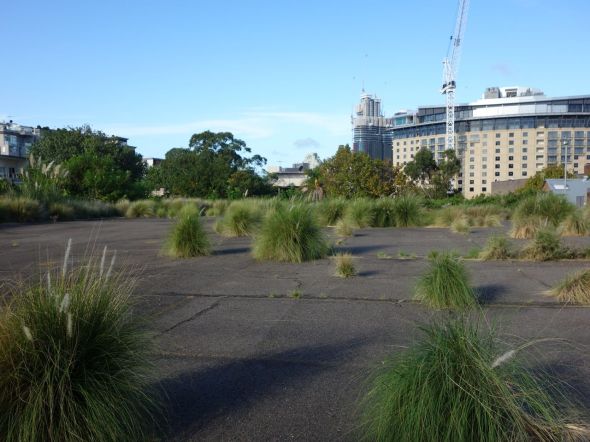 The view from here is of the city as a construction site. Cranes spike up into the sky, a tower at Barangaroo has numbers on the concrete levels like a counting game: 67, 68, 69, going up. Sydney, with its topography of ridges and headlands, has many vantage points where you can observe the city, but looking at it from a deserted, overgrown place is different from looking from somewhere deliberate. Standing in this disused lot, surrounded by empty parking spaces with the wind rustling the grass, the city’s drive towards reinvention feels tempered by its past spaces, its intermediary spaces. Something of the carpark’s transience rubs off on the city, which also seems impermanent, a kind of mirage.

13 Comments on “Terminus and the Suspension of Time”