The theatre is a surprising sight on a corner of long, straight Blaxcell Street, which is mostly lined with cottages and small apartment buildings. It rises from the street corner like a magnificent coral, pale pink with letters curling across the roof. They still spell out “Crest”, although it has long ceased to be a cinema with that name. The Crest is now the owned by the Blouza Association, a Lebanese community group with origins in the town of Blaoza in North Lebanon. The roundels that once spelled out Hoyts on the front fin of the cinema now spell out Blouza, and the hall occasionally hosts the group’s functions. Most of the time, though, the hall is closed and only glimpses of the elegant foyer can be had by peeking through the doors.

In the first half of the twentieth century Sydney had a proliferation of local cinemas. Of these only a few remain, like the Hayden Orpheum Picture Palace in Cremorne and the Randwick Ritz. In the 60s and 70s many were demolished and replaced by shopping centres, petrol stations or carparks, others remain in new guises as furniture barns or crumbling ruins. The Crest’s persistence is a rare thing. Perhaps its longevity is partly due to it being built rather late in the suburban cinema boom. It was one of the few to open in the 1940s, and while it ceased to be a cinema in the 60s, it has remained faithful to its art deco origins.

The hall is not often open to the public but one Sunday it was the venue for a science fiction and collectables fair. While my companion eagerly awaited the crates of comics and Dr Who paraphernalia I was curious to see what lay inside the hall. The foyer with its pink plasterwork details and aluminium-clad art deco bar I’d already seen from peeking through the door, but not the hall itself. After paying my entrance fee I stopped in the doorway in surprise. The hall was like a pale pink seashell, the ceiling patterned with little anemone-like circles and the walls had plaster details like trails of delicate seaweed. It was a Botticelli Venus kind of place, even with its tables of He-Man figurines and Star Wars merchandise.

As people browsed the stalls – a cosplay girl dressed as Poison Ivy, father and son figurine enthusiasts, an elderly woman holding a just-purchased Chucky doll – I sat on the stage steps and imagined the Crest’s various incarnations. In the 1950s it was a cinema showing westerns and romances, then it was a bingo hall and a ballroom, hired out for functions and weddings. In some ways it seems strange that so much detail was lavished on a cinema interior. Wherever a decorative detail could be included in the design it had been, the air vents with “H” shaped grilles over them and every doorway framed with fronds and curls.

The streets surrounding the Crest are a suburban grid of 20th century cottages. Some have neat gardens with tall cacti and hydrangeas, others weeds and the sunken frames of cars not destined to drive anywhere ever again. On one corner is a solid red brick house with a sagging but still intact paling fence. I can see through the slats that the garden is a quarter acre block of lawn which stretches out like a carpet. Only a few small mango trees interrupt the expanse of green. 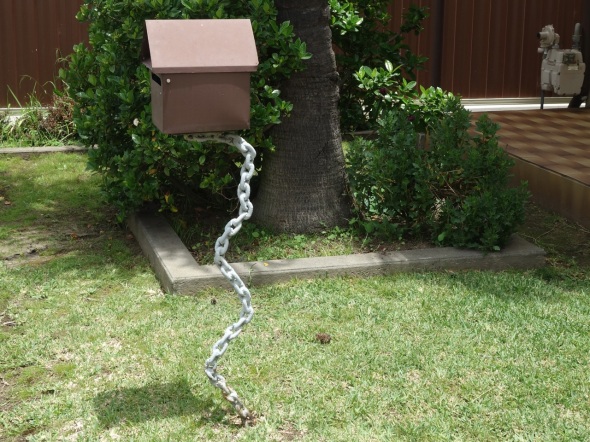 Each garden has a specific detail to distinguish it, whether a pristine lawn or row of statement conifers. The houses are the kinds of places that are animated on Sunday afternoons when families come to visit grandparents, or early in the morning when it’s the best time for watering the garden. In the heat of the day there are few people out. Two kittens tumble in a driveway, pausing to stare at me as I pass by. Mango trees are covered in small, green fruit. Here are there are 50s suburban flourishes, a concrete swan or an ornamental letterbox. The Belle View mixed business on Blaxcell Street has a sign offering provisions, smokes, sweets, drinks and ice creams, but the shutters are down and have been so for years. 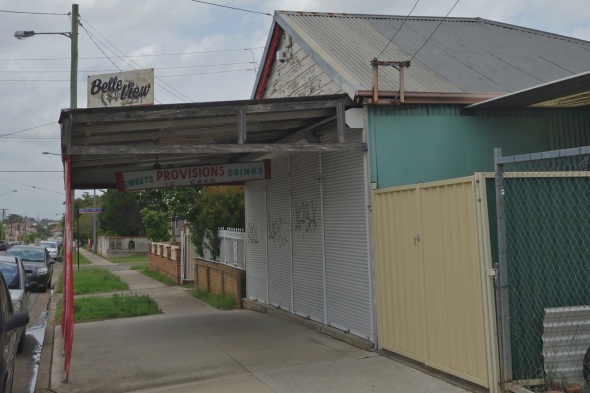 Granville is a curious mixture of details, reflecting its industrial heritage, its suburban environment and various communities. It’s the location of union headquarters, the Vietnam Veterans Federation of Australia, and the mysterious R.A.O.B G.L.E meeting hall (the Royal Antediluvian Order of Buffaloes Grand Lodge of England – antediluvian is not a word you expect to encounter on a suburban wander). This version of Granville is one of societies and allegiances. There are many other versions: a place where every second shop sells Lebanese bread from the Beirut Bakery, a place that at times has been known as run down and dangerous, once described by the local mayor ‘the most urban decayed area in Sydney’. I walk past a big old burnt out apartment building and this seems true for a moment, but then around the corner the Veterans are setting up for their Christmas party, people walk back to their cars with boxes of chicken from El Jannah and the cottages on Mary Street have roses in their gardens. All of these versions coexist.

On the south side the legend JESUS SAVES is painted in large black letters on all sides of a church hall. On the north side is another, similarly large and stark painted text, though this one has message MONEY LENT. The Money Lent building is one of numerous Granville’s yellow buildings, which stand out like they’ve been highlighted: The Barn office furniture on Parramatta Road, Silly Willy’s $2 Man. At the backs of buildings ghost signs advertise chemist shops, lino and Presto smallgoods. On this sign slices of ham are cut from the side of a cheerful, chubby pig. 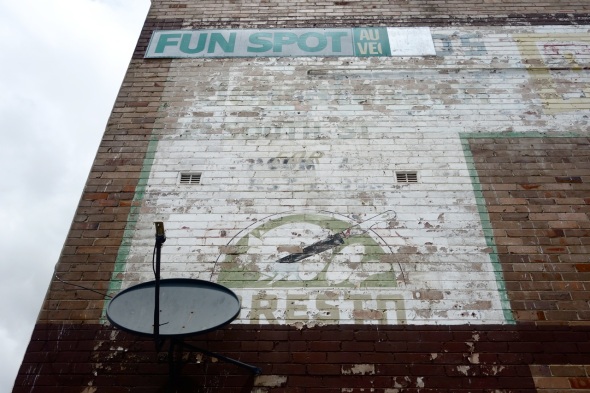 On the other side of the train station is another shopping street, Good Street. This is the Captain Cash MONEY LENT side, in close proximity to Parramatta Road and its stultifying effect on all but furniture stores and caryards. On this stretch of the street is a curious mixture of businesses, the Himalayan Restaurant in the old School of Arts Building, the Anawim Opportunity shop where a regular shopper deliberates over buying a large folding fan and the staff tease her about the fan dance she will be performing later that night.

Of all shops on Good Street, however, it is the Heaven on Earth Holy Store which is the most striking. Heaven on Earth sells religious statuary and catering supplies. On one side of the store are the saint statues, rosaries, and crucifixes, and on the other are stainless steel pans, glassware, and cooking contraptions, interspersed with more religious statuary and other giftware: carved wooden horses, ceramic chameleons. The store smells of incense and the shelves are cluttered with so many things that my eyes skip manically over them, from salt and pepper shakers to gift mugs with Porches on them, to pile of plates and giant rosaries. I’m not the first to discover the visual cacophony of Heaven on Earth; the store has many signs forbidding photographs.

Good Street crosses Parramatta Road and it’s here I cut through the corner lot. Like many of the lots in this area it’s a car yard, with rows of cheap cars lined up on the cracked and weedy concrete. This westernmost section of Parramatta Road is mostly car yards and furniture stores. The used car salesman stay in their air conditioned sheds until buyers appear, but no one much is around. Two boys walk along with Slurpees, a man dashes between caryards with a numberplate in a plastic sleeve dangling over his shoulder. Otherwise the road is a surging and cluttering stream of cars and trucks.

I head up towards Boral Concrete to see if the kangaroos are still there. They are concrete kangaroos, of course, few creatures venture to approach the busy road. Even as a human it’s difficult enough. I walk underneath the rail underpass, a terrifying 50 metres where there is only a thin pavement between a brick wall and the traffic. I pause at the edge of it like I’m about to plunge into a pool, waiting for the traffic to ease before rushing through. On the other side is a grim scene with police tape and scaffolding, the remains of a past accident. The garden bed where the kangaroos were is overgrown and it’s hard to see much through the fence. They are gone, perhaps, or buried underneath the long grass.

On the other side of the road is a more reliable mascot, Fiona the mannequin, who has been the guardian of RA Motors “Sydney’s Cheapest Cars” since 1983. It being late December she is dressed as Santa Claus. Above her black flags with skulls and crossbones in Santa hats flap in the wind and she is joined by a child-size mannequin dressed as a Christmas elf tied to a pylon. Now is the time to enjoy such spectacles, as there is in the planning 19,000 new high rise apartment homes for the Granville section of Parramatta Road by 2050. 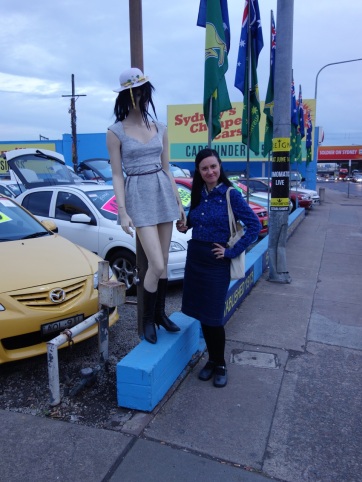 Visit Parramatta Road icons while you have the chance.

If now Granville is the place to buy a cheap used car, in the past it was known for its connections to the railways. From 1905 Australian steam and diesel trains on Australian railways were built in Granville at the Clyde Engineering Company. This was one of the area’s major employers, and the largest engineering manufacturer in the country at the time. Clyde Engineering made everything from trains to agricultural machinery, planes and lawnmowers. In their heyday company ran a popular exhibit at Sydney Royal Easter Shows to showcase their newest contraptions.

Granville’s other significant railway story is one of tragedy. In 1977 the Bold Street overpass was the site of Australia’s worst train disaster. 83 people died and hundreds were injured when a train travelling from the Blue Mountains derailed and hit the supports of the overpass, causing the bridge to collapse . Photographs show the huge buckled slabs of the road on top of the tracks, the jackknifed carriages, crowds of emergency service personnel, and stretchers laid out. Crowds of people looked down from behind the wire fence along Railway Parade.

The disaster happened before I was born but was still very much in the public consciousness when I was child in the 1980s. My mother, still horrified by reports of the disaster many years on, would sometimes recall the story one of the last people to be rescued, a young woman who was a ballet dancer. The photograph of the woman being lifted, smiling, from the wreck after 9 hours trapped was one of the most well known images from the disaster and her story became of the best known of the survivors’. Her story was one of many tragedies, as her injuries were substantial and ended her dancing career.

Each anniversary of the disaster 83 roses are offered in tribute to the victims. Until his death this year, the same local priest who in 1977 pulled people from the wreckage blessed the roses. The roses, after being blessed, are dropped from Railway Parade onto the tracks below, their red petals bright against the gravel.