The Sphinx in the City

Bobbin Head Road stretches out, continuing beyond the cottages of North Turramurra, past the golf course and retirement homes, the rehabilitation hospital and the high school with a concrete binishell dome that resembles a stranded ufo. Past this is the Ku-RingGai Chase national park, the bushland which forms the northern boundary of Sydney. 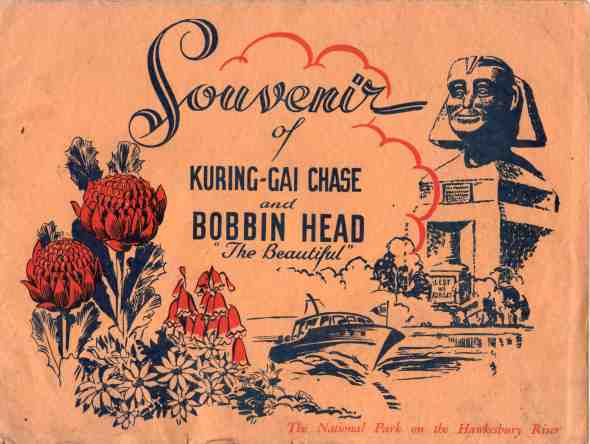 On walking through the gates to the park there is an immediate shift as the atmosphere of the forest replaces that of the suburban landscape. This is the land of the Guringai people, eucalypts and woodlands, creeks and sandstone. There are walking tracks through the park and picnic areas here and there, but most of the land is forest. It’s an overcast day and there is no one else in sight as I walk down the path to the immediate right of the gates. Apart from the birds and the wind in the trees, all is still. Here and there hot pink ribbons are tied to the tree branches, marking out a course, the artificial colour striking against the green.

A little way along the path the Sphinx becomes visible, rising from a shelf of sandstone in the centre of an amphitheatre. Its thick lips and deep-set eyes create a peaceful but disquieting expression. The trails of black paint or oil which have run down its face and seeped into the stone add to this sense of disquiet. The black paint, though probably the work of some Turramurra vandals, give the sphinx a postapocalyptic look. 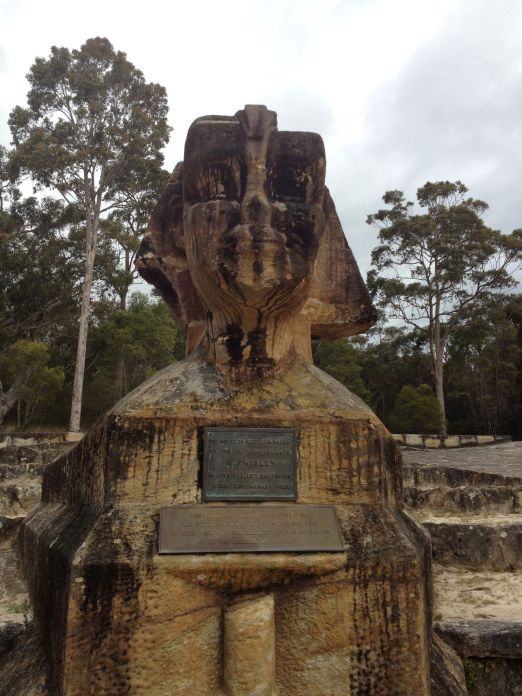 Two small pyramids are to either side of the Sphinx, faded wreaths at their base. The Sphinx is a war memorial and was carved by the returned soldier William Shirley in the 1920s. Shirley, a former stonemason, was a patient at the nearby Lady Davidson Convalescent Hospital and, inspired by a promising block of sandstone, carved the sphinx over two years as a tribute to his World War 1 comrades. Occasionally the sphinx is the focus for memorial services. More often it offers its mysterious smile to people heading out into the walking tracks through the park. Mostly the Sphinx sits alone in its stone lair, as the creatures in the surrounding forest rustle the leaves.

It’s peaceful here, if eerie. The amphitheatre, steps and the pyramids form an unexpected geometry and suggest something mystical is about to take place. Standing in front of the Sphinx I wait for it to test me with its riddle. No question comes to mind but a memory does, of a place not far away in North Turramurra. When I was a child my parents would drive me past it, knowing how it fascinated me, but I’d not seen it since. I leave the Sphinx with an urge to find it.

Turramurra is a suburb with tall trees and large gardens, most often described as “leafy” in real estate brochures or the rare occasions when it is mentioned in the media. In late winter the camellia bushes are in full bloom and the magnolias have flowered. White cockatoos weigh the branches of liquidambar trees, nibbling at the conkers before shrieking off to their next destination. I travel back along Bobbin Head Road and turn off about halfway down, guided by my memory. If the bushland is an unexpected place to encounter ancient Egypt, so is a quiet residential street deep in the suburbs. Among an otherwise unremarkable stretch of houses, the pyramids appear. 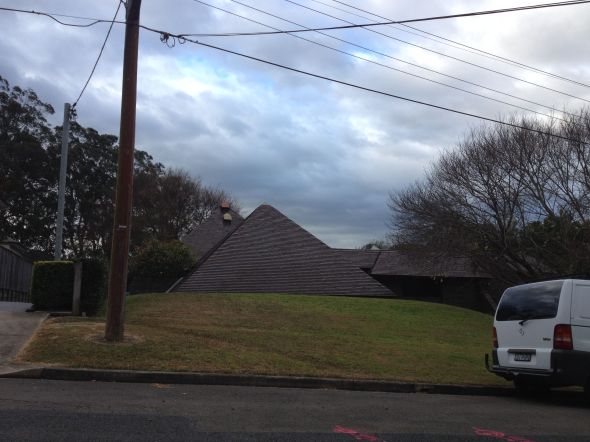 The pyramid house is no less strange to me than it had been when I was a child, a rare moment of synchronicity between past and present. Rising up from behind a grassy mound is the steep sides of a pyramid, with another visible behind. The pyramids are covered by dark, shiny roof tiles and the whole place has a secretive appearance. That this could be a house with messy teenage bedrooms inside it, a kitchen with bills and bric a brac collecting on the bench, and a lounge room with a tv and bookcases, seemed unusual to my childhood mind. Surely, whoever lived there must do so in an extraordinary way.

Searching for pyramids in the Sydney suburbs is an occupation that calls to mind natural science researcher Rex Gilroy. Gilroy has identified a number of pyramids in Australia, most strikingly the Gympie Pyramid, the origins of which are attributed variously to Egypt, South America, China, and the lost civilization of Uru. Gilroy collects traces of previous civilisations in the landscape – pyramids, suggestively shaped rocks, engravings. One chapter of Gilroy’s book on Uru has the title “Suburban Atlantis – Pyramid Builders Of Sydney’s West“. Pyramid builders persist into the present: 100 000 tonnes of soil from the construction of the M7 motorway was used to make a 25 metre pyramid at Prestons. The great south western pyramid fits neatly within a triangle of exit ramps.

Sydney’s most central pyramid is in the Royal Botanical Gardens, although it is soon to disappear. Built in 1972 to house tropical plants, the pyramid glasshouse faces demolition ahead of the construction of a new centre called the “Biome”, set to open in 2016. For now the pyramid is still there, rising up mysteriously from the lawns where people picnic, have weddings, and lie stretched out in the sun at all seasons of the year.

Up close the pyramid’s panes of glass are murky and people have traced messages in the dust on the outside, names and squiggles, a cartoon eye. Peering in, for the pyramid is closed to the public now, the vines still clamber across the trees and the interior has a damp, ferny lushness. In the adjacent glasshouse building the plants have been removed and the rock and concrete structures that once supported them are bare. Only a big staghorn fern is left, clinging to the back wall amid dangling wires and ropes. The walkways snake through this abandoned grotto.

The gardens and their surrounds have many traces of ancient Egypt. Across from the Art Gallery of NSW are a pair of bronze Sphinxes, cast from a pair of sandstone Sphinxes that once guarded the swingset on Art Gallery Road.

Elsewhere in the gardens is one of the many Sydney obelisks. It rises from the centre of the pond next to the cafe and contains the remains of botanist Allan Cunningham. He was an early collector of Australian plants and was in 1837 the superintendant of the botanic gardens, though he resigned in disgust at finding his job to be mostly “a mere cultivator of cabbages and turnips” in the Governer’s kitchen garden. In 1901 his remains were removed from the Devonshire Street Cemetery (as all of the remains were – the cemetery was to become Central Station), placed in a lead casket and housed in this obelisk.

Ancient Egyptian obelisks are thought to represent the rays of the sun, but Sydney’s obelisks are put to diverse, utilitarian purposes. The most well known Sydney obelisk is at the edge of Hyde Park. No mere decoration, it doubles as a sewer vent chimney, and was the city’s first. While there are many other sewer vent chimneys in Sydney, this is the only one within an obelisk. When it was constructed in 1857 and its purpose became known, it was called “Thornton’s Scent Bottle” after the Lord Mayor of the time, George Thornton.

Travelling west, another stop on the ancient Egypt tour of Sydney is the Egyptian room in the Petersham Masonic Centre, decorated with scenes from the Book of the Dead. It’s a mysterious place, only open to the public one evening a year. Further west, after a slow drive along Parramatta Road, another Sphinx appears. This one is outside Euro Iron in Lidcombe, guarding wrought iron fences and screens and patches of dead grass. This is one of the road’s more desolate stretches, between the Rentokil headquarters and the big empty China Fair warehouse with the lantern on the sign peeling and faded. Trash from the street collects around the grass at the base of the Sphinx, receipts and packets, scraps of plastic and paper. It gathers and disperses but the Sphinx stays constant, smiling slightly at the passing cars as if they’re barely there.

7 Comments on “The Sphinx in the City”