A fence went up around the block on the corner, hemming in a string of houses. A pale green fibro, a house with the front room curving out into a rotunda, a house with tall conifers planted along the length of the driveway. They were unremarkable houses, their greatest distinction being their proximity to the busy intersection of Epping and Lane Cove Roads. The kind of houses that gave you cause to wonder what it would be like to live on such a busy road, beside the endless traffic.

It’s a familiar process. The fence goes up with the sign advertising the new development. The houses languish behind the fence for a while, quickly falling into disarray. Without people to care for them the gutters droop and windows break. Tags appear on the walls as the empty houses are explored. They stay like this for a while, the decaying structures taking on a solemn, ruined look. Then one day the bulldozers move in and the houses are gone. Though this has been expected the land looks bare without them.

This time the sign advertises “Live Next to the High Tech Village”, referring to the nearby business districts of Macquarie Park and North Ryde. There’s an artist’s impression of the proposed development, a collection of neat blocks of varying colours and textures. Behind the sign droops the remains of a brick cottage.

Most of the houses have been demolished now and the cold smell of plaster and smashed bricks floats out from behind the perimeter fence. The rubble has yet to be cleared and where each house once stood is a twisted pile of bits and pieces, bricks and tiles, wood, metal, the hairy wedges of insulation bats. The view from the overpass is a pattern of these house-sized piles. There’s no way to walk up onto the overpass, so this sight is only visible in glimpses while driving. From this aspect it looks less like demolition than a kind of weird magic, like the air has been sucked out of the houses until they collapsed inwards.

Closer to the road the fences and letterboxes remain as if nothing beyond them is out of the ordinary. The trees have been left also, arranged in seemingly odd patterns now the houses they once surrounded are gone. There are two big oak trees, their leaves turned golden for autumn. Leaves drift down to cover the churned-up ground below. 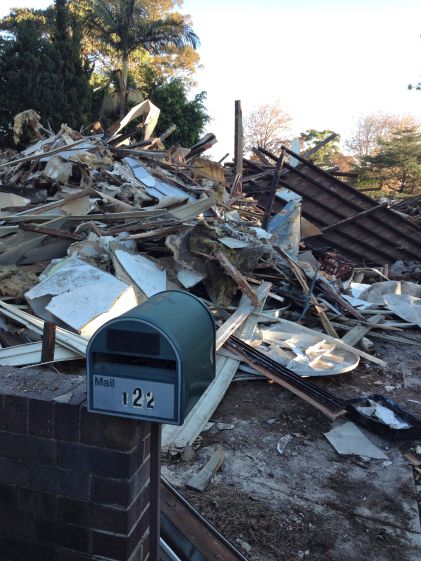 Further inside the site an excavator digs into a pile of debris and I watch it through a gap. The shadecloth that blocks the view has sagged in places and it’s here I look through at the piles of rubble that once were houses. Although the destruction makes me uneasy the demolition site is fascinating, how quickly familiar places can be reduced to nothing. The excavator claws up another bite.

Last year I went to Shanghai, a city which has been transformed by large scale demolition and reconstruction. I’d pass by huge blocks where hundreds of old houses were in the process of being torn down. One of the blocks where this was taking place had a fence around it made up of front doors, each a different colour and shape. Though the demolition was on a much greater scale to what occurs in Sydney it provoked the same feeling, a mixture of melancholy and curiosity, a tangible sense of time and change.

So much of what we know of cities are buildings. Even in Sydney, where the waterways divide up the land and the city’s natural setting is strongly apparent, we traverse the city by its structures. In the suburbs, the view out the car window of house after house becomes a memory game, a rehearsal of particular details. Most powerful are the signs that mean you’re almost home: mine are a fruit and vegetable shop with garishly painted signs, a weedy vacant lot, an apartment building with a big guava tree out the front. It is easy to regard these things as permanent and a shock when they are shown not to be.

The demolition site changes a little every day, but there’s one constant. At the western corner of the block a house remains. It is a solid red brick with white ironwork railings along the veranda. The lawn is meticulously kept, and along the front fence there are dahlias and rose bushes. The roses are flowering and large dark red blooms weight the ends of the branches. Here the concrete and plaster smell of demolition disappears underneath the scent of the roses. 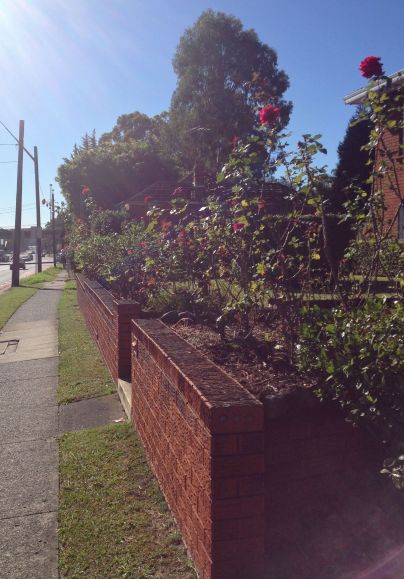 Buildings are demolished, new ones are built. The process continues. The development takes shape and the construction site is busy with workers assembling the new apartment buildings. Once finished the blocks have a raw look, but with time the stark new surfaces take on a comfortable patina. They have an established look and there’s little reason to imagine what might have been there before. Until the cycle begins again. The run down apartment blocks are vacated and a fence surrounds the empty buildings. They quickly turn to disrepair. Then, one day, they too are gone.