Kurnell is most often seen from above, from the windows of planes as they come in to land over Botany Bay. The plane flies over the white polka dots of the petrol and oil tanks in the Caltex Oil refinery, then the thin strip of sandy beach that encloses the bay, then hovers over the water in such a way that nervous passengers become certain the plane will miss the runway. Yet, at the last moment, land appears.

At night, the refinery’s glow can be seen from across the bay, and flares of flame emerge from the chimneys like giant bunsen burners. The buildings are illuminated with strings of giant fairy lights. A midnight drive down the dark road to Kurnell, awaiting the lights of the refinery, is a scary adventure. Come morning this magical scene disappears, replaced with the grimy, industrial truth. The refinery’s tanks, pipes and chimneys are a reminder of the giant industries on which the world now relies, a landscape manmade but inhuman. 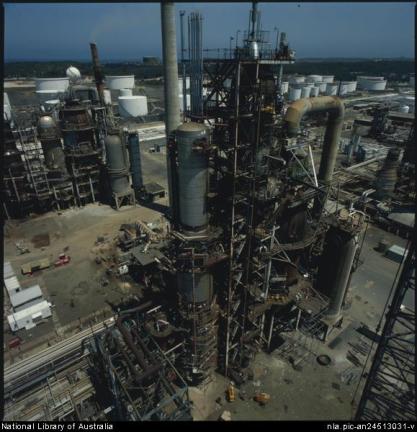 Refinery photo from the NLA

There is only one road into Kurnell, Captain Cook Drive. It follows the inner shore of the peninsula, passing by a wastewater treatment plant, a sand mine, a nature reserve, the desalination plant and the Caltex Oil Refinery. The refinery is positioned almost at the tip of the peninsula, surrounded by kilometres of vegetation and sand dunes. The drive there passes through coastal bushland, interrupted by the gates to industrial sites. The last thing I expect to find at the end of Captain Cook Drive is a suburb.

In front of the refinery entrance is a small Caltex petrol station, where two 80s Holden Commodores, one light brown, one dark brown, are being filled up, direct from the source. Just beyond this a sign welcomes visitors to Kurnell, “the birthplace of modern Australia”.

The modern Australia of Kurnell is a grid of suburban streets, lined with small 50s houses and the behemoth homes with porticos and large garages that are slowly replacing them. Many of the bayside houses on Prince Charles Parade are newly built in this style, with wide patios designed for hours of relaxing and watching the planes take off from the airport across the bay. There are still some small fibro houses remaining at the end of the street, their long yards cluttered with trucks, horse stables and rusting machines. In the driveway of one of these houses is a table set up with a jumble of objects. The cardboard sign nailed to the side of the table reads “Golden Coin Sale”.

Among the jars and plates and vases for sale is a riding hat, which I try on and find to fit me. I check my golden coin situation and offer the man at the stall $2. As I hand him the money I ask what it is like living in Kurnell.
“I love it!” he says.

“Do you feel like it’s a part of Sydney?”

He pauses. “Not really,” he says, as if this is one of the things he loves about it. “It’s a village, surrounded by a city.” He points behind his house and tells me he kept a rooster, horses, everything he could want back there.

There were more horses in Kurnell than I had been expecting. Among the trucks and cars collected around one house was a horse float, a velvety brown snout poking out from its window. Behind the girl scout hall, a brick box with a mural on the side of a motley collection of variously sized guides tending a campfire, was a girl trotting around a dressage ring on a grey and white pony.

Horses are not, however, the most unusual pets to be found here.  In 2003 I was watching the news on television and, during the animal stories and bikies riding for charity segment at the end, there was a story about someone who had been keeping a 2.5 metre saltwater crocodile in their backyard pool. The pool had been enclosed by a cage, however as it is illegal to keep crocodiles as pets, the zoo had come to claim the beast, citing fears that it might get loose and escape into Sydney’s waterways.

Although the crocodile’s owner wasn’t home at time of the raid to comment, a National Parks spokesperson must have spoken to the nearby residents, as they reported that “the neighbours had grown quite attached to it.”

As I watched the report, the location appeared on the bottom of the screen: Kurnell. I wasn’t surprised. If one did want to covertly keep a crocodile, Kurnell seems suitably removed from the city for you to get away with it.

Riding hat purchased, I turn back along Prince Charles Parade. Across from the houses is Silver Beach, a long stretch of sand where people sunbake and sit to  eat ice creams bought from the combined post office/fish and chip shop.

Interrupting the beach is the Caltex wharf, its pipes stretching a kilometre out into the bay. Underneath the wharf barnacles grow thickly on the pylons, and a CCTV camera watches all who pass by. I hear the faint sounds of a siren, a long, droning air raid kind of sound, which must have been coming from the refinery. Those who live in Kurnell must be used to it, but I can’t get the refinery out of my thoughts. As much as Kurnell appears like a normal suburb, details of the refinery are a constant presence: the chimneys and tanks visible behind the houses, vacant lots, the red and green star of the Caltex logo on signs and .  Many Kurnell residents have worked at the refinery since it opened in the 1950s, although this is set to change when Caltex downgrades the refinery to a fuel storage facility in 2014. 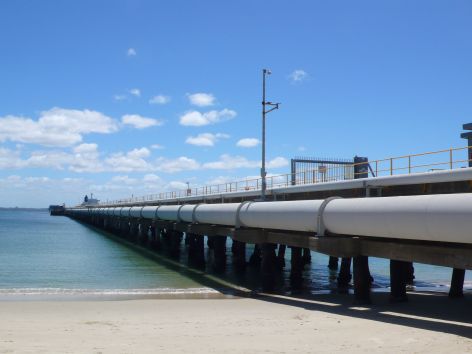 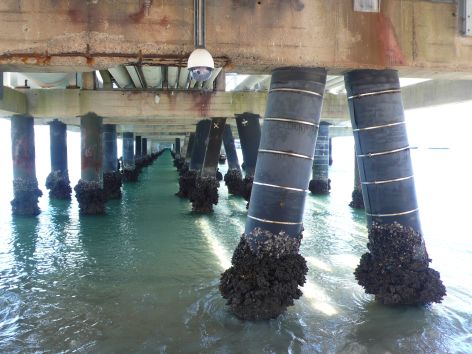 The two most prominent presences in Kurnell are Caltex and Captain Cook. On weekdays, convoys of buses transport school children to the site of Cook’s landing place in 1770. This spot was marked by an obelisk in 1870, a truly colonial gesture: an object derived from ancient Egypt to commemorate the discovery of a “new” land. Set into the path leading to it is a recent revision, the words Warra warra wai  – ‘go away’, documented as the words spoken by the Gweagal people to Cook and his party. These words are proud and lonely to imagine. I hear them in my head over the zip of jet skis from the bay behind me.

In 1970, a reenactment of Cook’s landing was staged here, with the Queen in attendance, watching from under a marquee on the beach. As Cook’s party approached the shore in a rowboat the event was upstaged by a group of Sydney university students who roared through in a speedboat, claiming the land for the famously mad King George III. While this was going on, at La Perouse on the other side of the bay, Aboriginal people threw wreaths into the bay in a mourning ceremony to acknowledge their dispossession of the land. 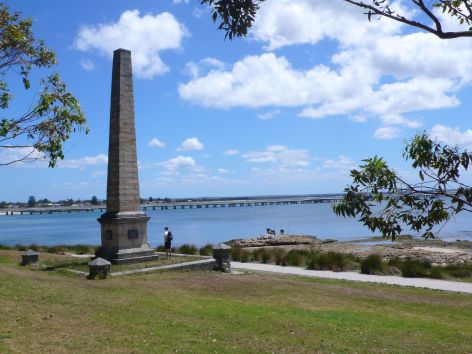 Botany Bay was originally intended as the site for the penal settlement that would become Sydney, before Arthur Phillip decided on the more suitable Port Jackson to the north in 1788. Botany Bay is the city’s alternate harbour, a mirror city of utility, dominated by the functional structures of the airport and shipping container port. I watch planes shooting out from the airport in different directions, and a freighter stacked with red Hamburg Sud shipping containers moving slowly towards the ocean. Beyond the cranes of the container terminal is the Sydney city skyline, muted by a bluish haze. I try to imagine what kind of Sydney would exist if the settlement had been built in Botany Bay instead. The bay has none of the drama of Sydney Harbour, being a wide, almost spherical bay surrounded by flat land. The Botany Bay Sydney would have been a calmer place, perhaps.

It is difficult to imagine Kurnell as the site for a city. It is Sunday and the reserve is crowded with picnics. A trio of teenagers play boules on the grass beneath three kookaburra observers perched in a tree above them. Around a table decorated with Happy Birthday bunting a family drink Coronas and converse in Russian. On the far side of the park a group of divers remove their tanks and peel off their wetsuits. As I walk around I come across many monuments and information panels. I read a series of panels describing the wildlife that once inhabited the area, before their habitat was destroyed. For what seems to be a very natural place it has undergone extensive environmental change, from the clearing of vast areas of ironbark forest to provide timber to build houses in the Sydney suburbs, to Victorian gents converging on Kurnell to hunt koalas.

On the eastern side of the peninsula are Kurnell’s sand dunes, which were created after the land was cleared in the 19th century. The dunes became a significant feature of the landscape, used by everyone from families visiting for a day of sliding down the sandhills, film crews filming Mad Max Beyond Thunderdome, and criminals disposing of bodies. But now even the dunes have been almost mined out of existence.

Kurnell’s isolation – both separate from, and part of Sydney – has shaped its character. Prior to the construction of Captain Cook Drive in the 1950s there was no road leading into Kurnell and most people arrived by ferry from La Perouse. In the early 20th century the peninsula was a popular place to camp and a shack community was established here during the 1930s Depression. Other people lived in precarious-looking houses they had constructed on the ocean cliffs on the other side of the peninsula. 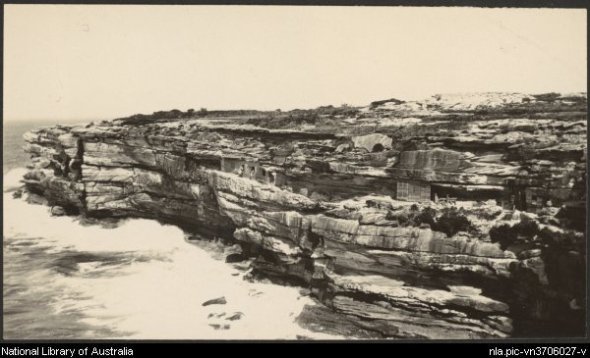 Photo from the NLA…look carefully and see if you can spot the houses.

The cliff houses and shanties have long since disappeared and the ferry ceased to run. The suburban streets of Kurnell are a regular pattern of houses, lawns, fences, garden ornaments and letterboxes. Australian flags fly outside fibro cottages and beachfront mini-mansions. Look closely, though, and irregularities appear, as they do in all suburbs. A garage door with the ghosts of angry warnings showing through under the paint. A van advertising white dove release services for weddings, funerals, birthdays and special occasions, its numberplate DOV 24U. An abandoned space hopper toy, faded to white, dumped in front of one of the vacant lots which line up with the path of the Caltex pipeline.