I first discovered Mirror Sydney in the bric and brac section of an op shop somewhere in the Sydney suburbs, about fifteen years ago. Op shopping was a marginal activity at that point in time, and there was great treasure to be found. I came to know the city through visiting its op shops, travelling to every St Vincent de Paul op shop for my Vinnies zine. “City”, to me, has always included the suburbs, and the more I travelled within them, the more expansive my feelings of home became.

Mirror Sydney was in among a pile of photo albums, the self adhesive kind that, over time, trap your photographs against their sticky pages, making them impossible to remove. The covers of these albums are usually sentimental scenes of beachside sunsets, or puppies and kittens. 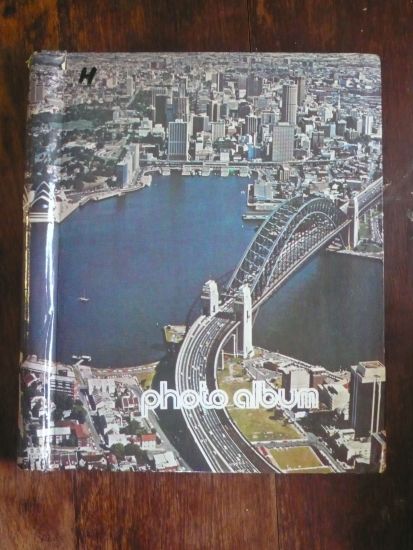 This 1960s cityscape itself was appealing enough for me to want to buy the album, but then I turned it over:

The twin bridges and roads leading off into the unknown captured something of the way  I felt about Sydney and my explorations of it. I liked the idea of there being a mirror city to that of tourist, showpiece Sydney, or Sydney’s various stereotypes. The Mirror Sydney was the city that I inhabited. It had the same shape, but led off in other directions.

To live in a city is to make our own paths and connections. In Infinite City: a San Francisco Atlas by Rebecca Solnit, she begins to calculate the potential number of personal maps that might exist for the city. Each of the eight hundred thousand inhabitants of San Francisco contains multiple maps, she writes, listing some: “areas of knowledge, rumours, fears, friendships, remembered histories and facts, alternate versions, desires, the map of everyday activity versus the map of occasional discovery, the past versus the present…” The pleasure of life in a city is this multiplicity, and in reading others’ personal accounts of familiar places they are both recognisable and alien.

Over the next three years I will be filling the sticky pages of this album with a constellation of writings about the significant sites of Mirror Sydney. Some will be lifelong favourites, others new discoveries.